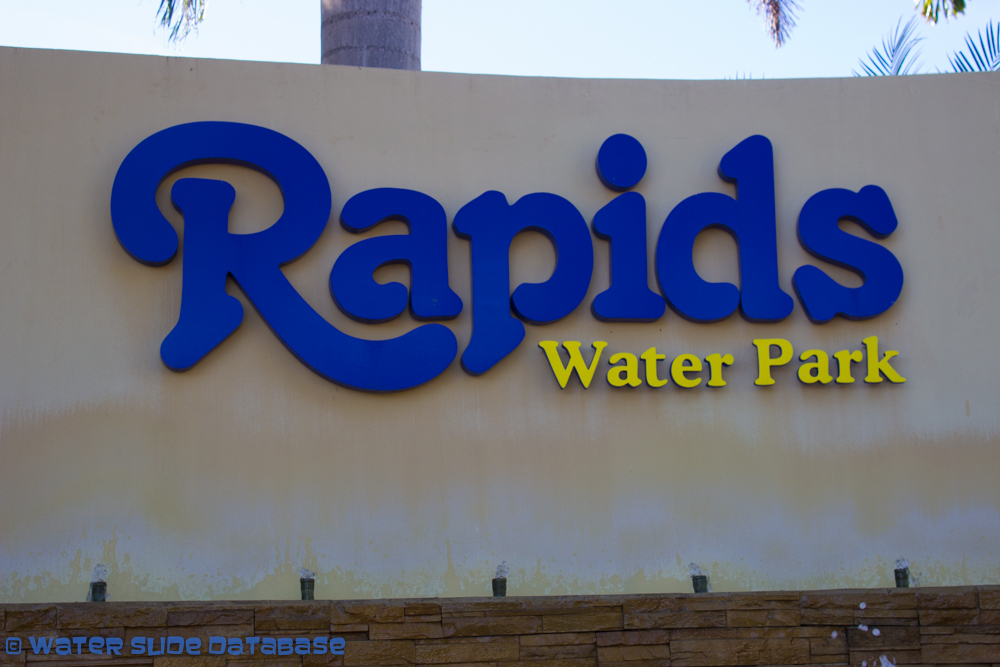 To start my week long break in Florida, I made a 50 minute drive north from Miami to Riviera Beach, Florida (near West Palm Beach) to visit Rapids Water Park. Later within the week was a 3-day Disney Dream Cruise out of Port Canaveral which ported in Nassau, Bahamas, and Castaway Cay island. We’ll get to that cruise in a later report.
The first thing to note about Rapids is that it is huge! The water park has a whopping collection of 13 different ProSlide brand water slides (some with multiple flumes/lanes, which would count as 35 altogether!) within a 30-acre property. The majority of water slides are very thrilling, but the collection ranges from wild for the thrill seekers, to mild for those who can’t or choose not to experience the more thrilling slides.
Due to personal complications, my day started later than I had originally planned, so I only had roughly 3 1/2 hours to experience as much of the water park as I could. Luckily the late start would not prove to be a major issue, because the water park’s first operating day of the season was only three days before my visit! So one of the biggest advantages of visiting on this day, March 18th, was that the water park was nearly vacant; aside from the few groups enjoying the park, and the lifeguards and staff that were present. Most lines for the slides were practically walk-ons, which allowed me plenty of time to ride the slides I could and photograph the park!
After entering and getting settled near the park’s wave pool to stash my stuff, I started making my way around the edge of the park to the first ride.
Old Yellar 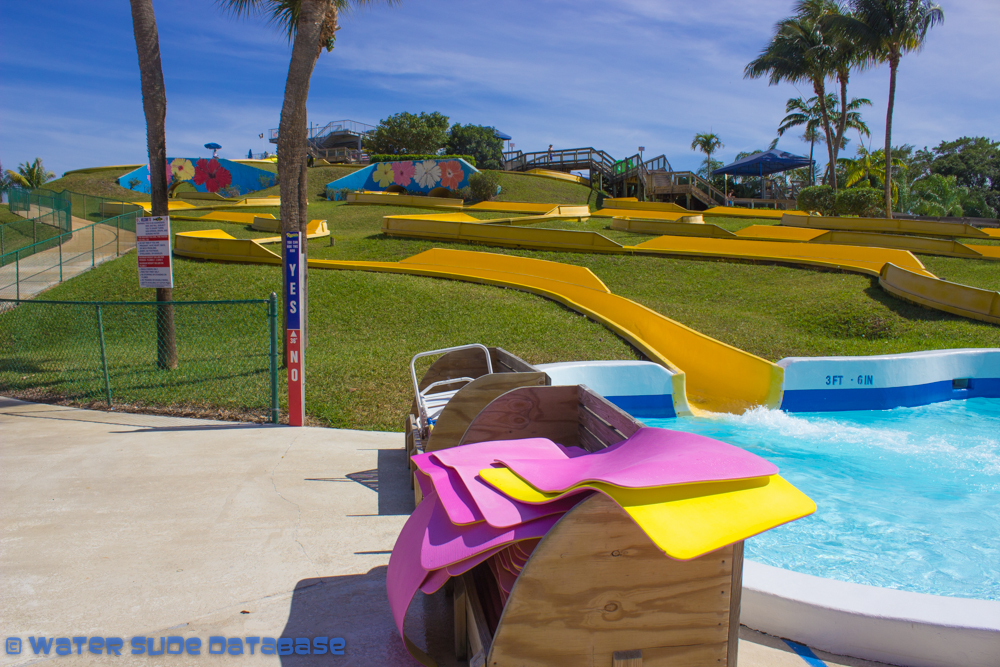 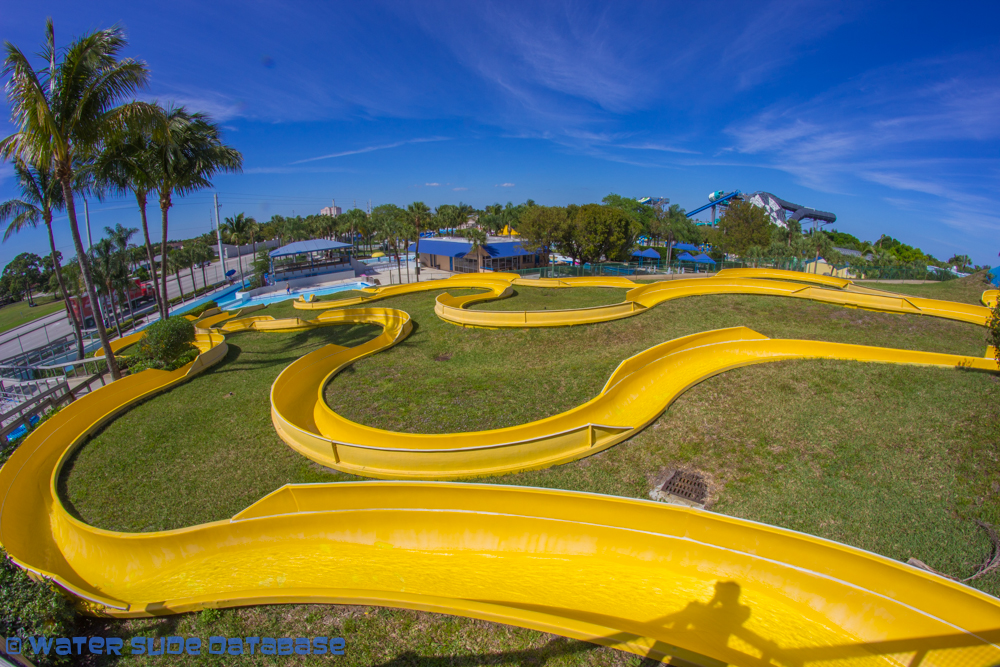 The first slide I was able to hit was Old Yellar, which is 4 yellow body slides that utilize flat mats that the rider sits on. It looked to be one of the park’s oldest slides, judging by the way the flume sat partially into the ground and had a small pool for each of the entrances to the slides.
After sitting on the mat and pushing yourself off, riders would cruise through various left and right turns, some with tunnels, before coming to an end in a pool. The course is simple enough, but the mats allowed for slightly faster speeds than would a normal body slide, and they allow higher left and right bankings along curves.
Kraken Racer 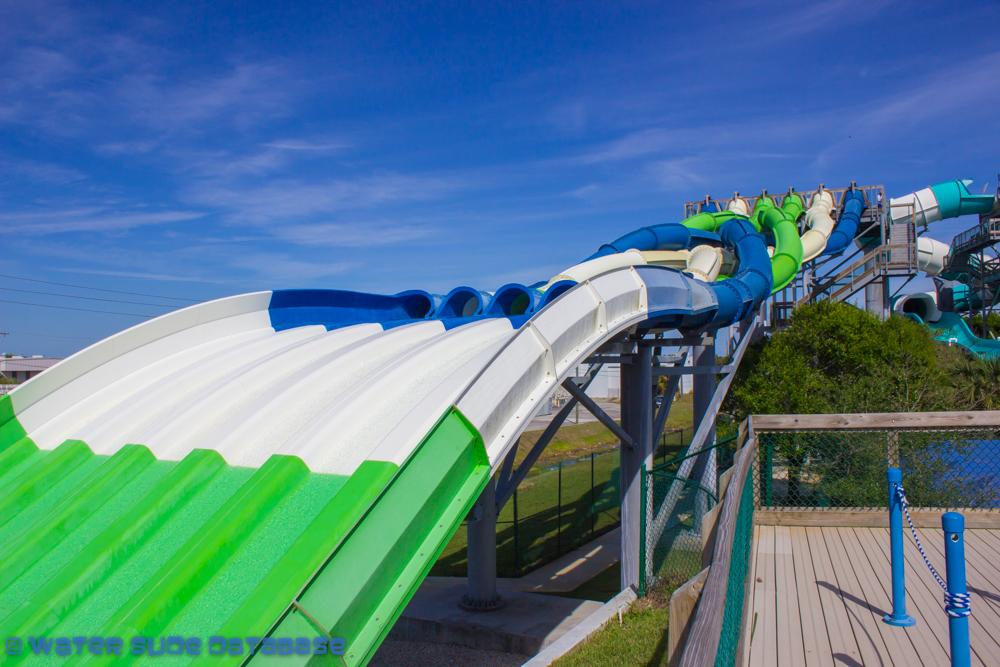 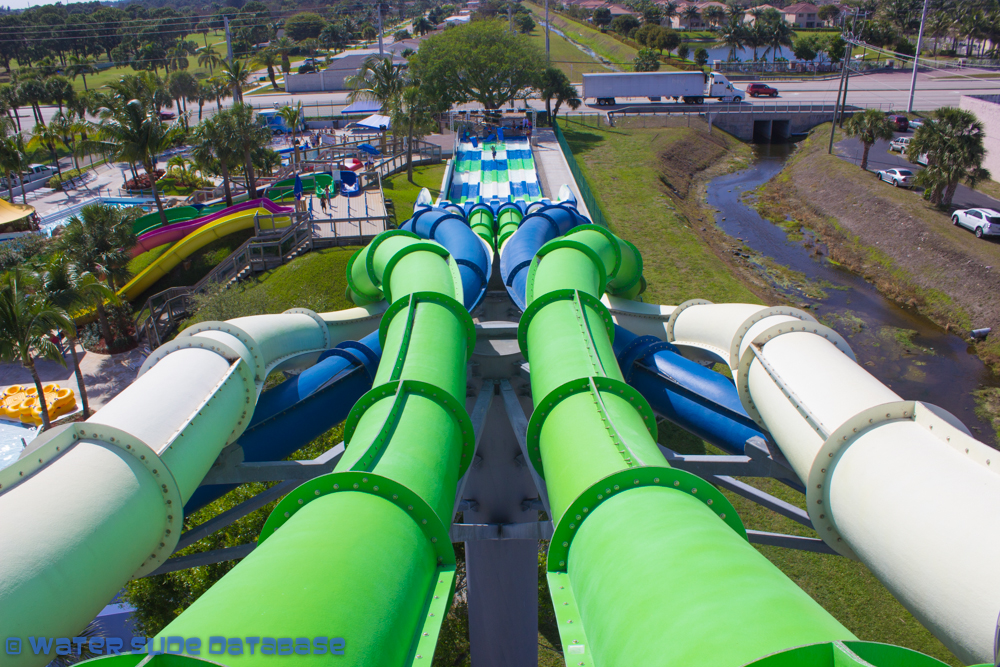 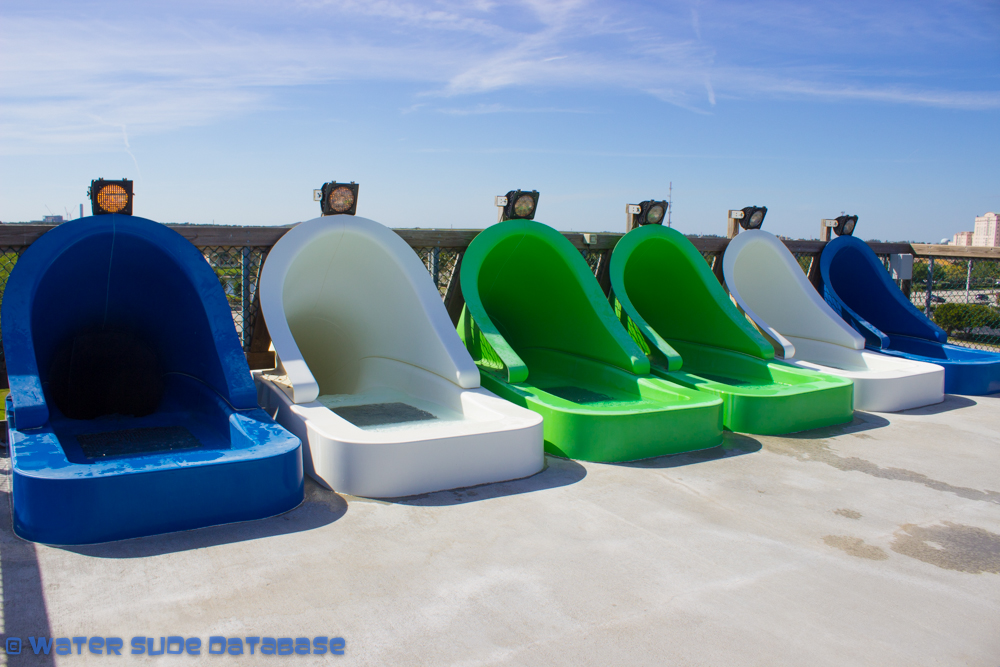 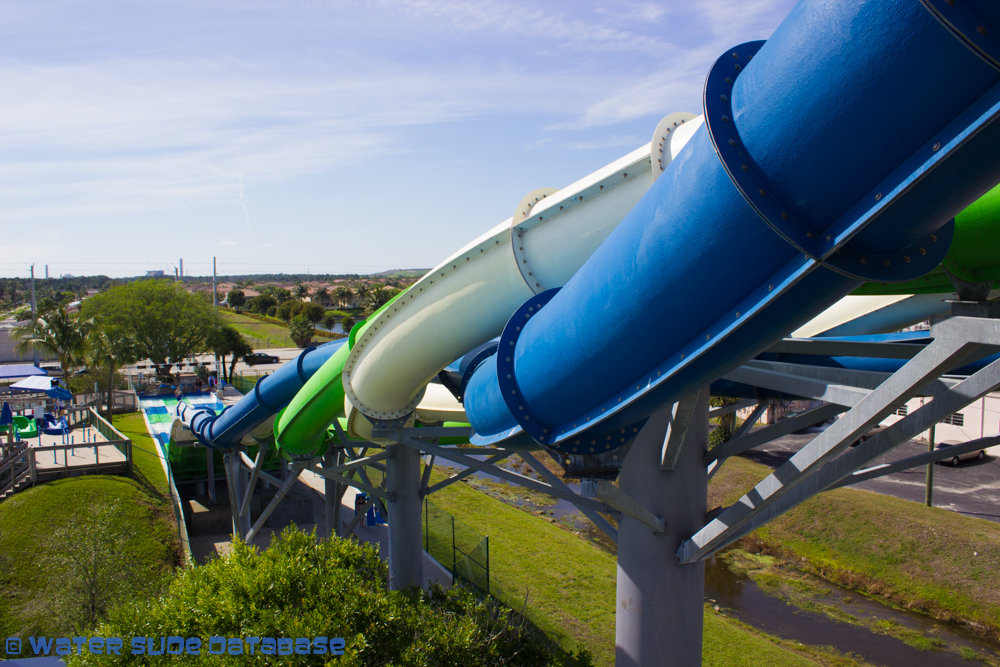 After Old Yellar, I made my way across the park’s pedestrian bridge to Splash Island, which was the second-half of the water park split in half by a service road. Once at the far edge of the park, I grabbed a belly mat and ascended the stairs to try the park’s latest water slide, Rapids Racer.
Rapids Racer is a ProSlide KrakenRACER belly mat slide, and was the first of its type built by ProSlide when it opened in 2011. It consists of 6 tunnels that intertwine each other in pairs of three, before the tunnel ends and all lanes connect for a large final drop towards the shutdown lane. I was able to have a try on the three far-left lanes for each color; first green, then white, and then blue. 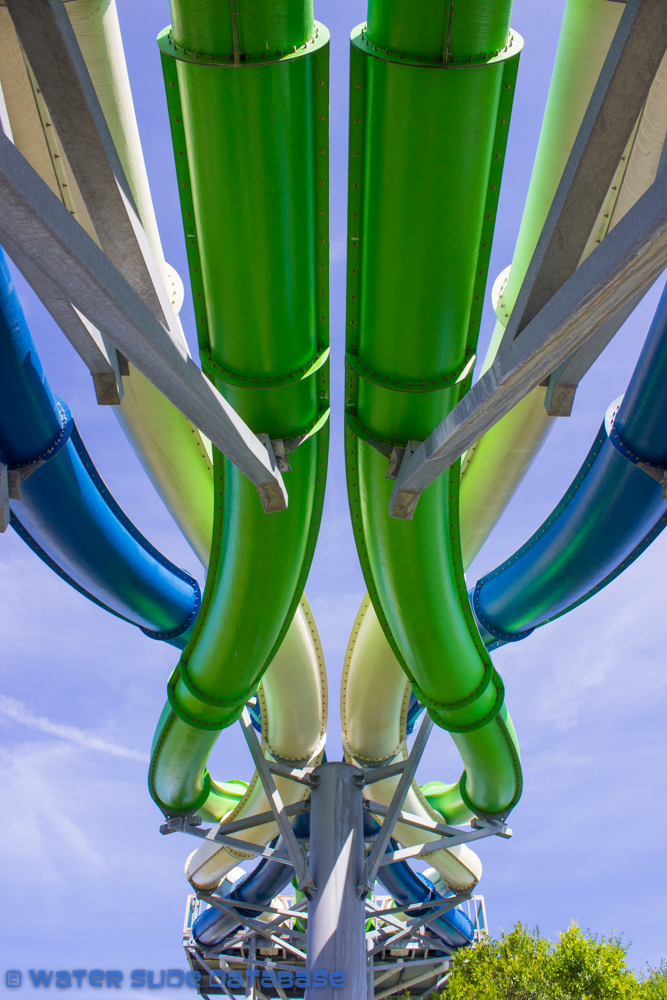 The intertwining tunnels were very unique compared to other tunneled mat racers I’ve been on, which usually consisted of a full helix before exiting into a drop. To describe my experience on it, there is a nice rush of air as I gained speed from the initial drop and curve, and the slide’s slight changes in direction made the mat a tad difficult to keep completely steady (especially in the white flume). I’d assume something like this would result in some inexperienced riders on more busy operating days losing control of their mats and unintentionally rolling onto their backs before coming to the drop, which would create some entertainment for onlookers.

All-in-all, I thought it was a pretty fun and very unique take on a mat racer compared to those which simply dip multiple times.

Making my way from Rapids Racer, I stopped by Splash Hill to try one of the slides. Unfortunately after doing so, I somehow managed to cut my right toe, which could have been from pointing my feet toward the floor when I landed in the pool. After having a lifeguard clean and wrap it up, I decided not to get right back into the water, but to grab my camera and take advantage of photographing the water park for a little while.

After photographing the entire water park, I set aside my camera equipment again and managed to take on more slides in the park. 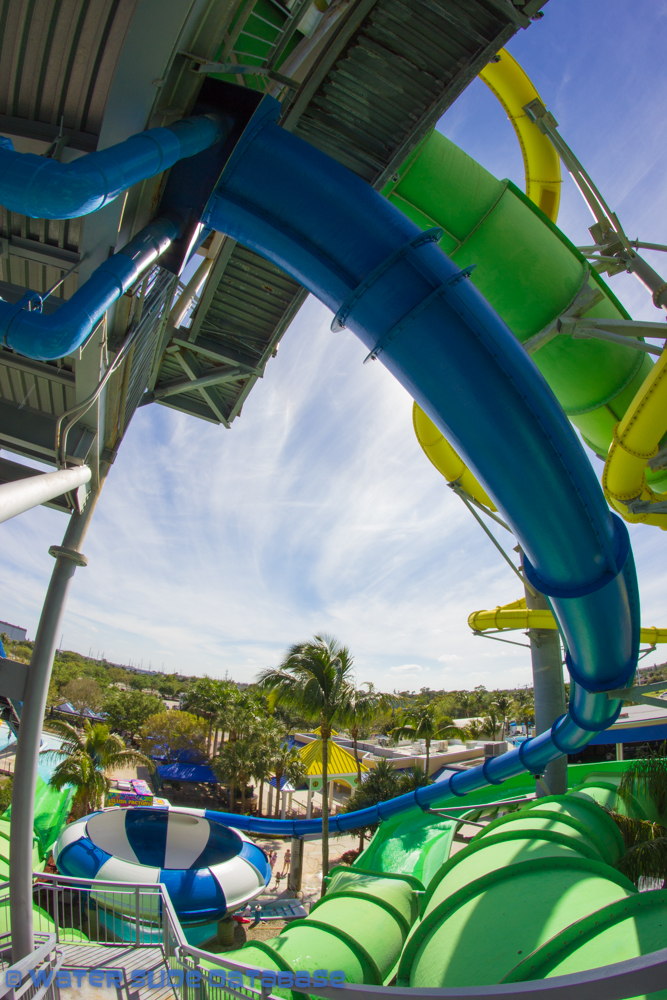 Baby Blue
Baby Blue is a body bowl slide situated within the slide complex near the front of the park. It consists of a wide and steady curve to the left as the slider gains an immense amount of speed before being spat out into the bowl and completing multiple revolutions around the inner perimeter, then falling through the center opening and into the 8 1/2 feet deep pool where a lifeguard will help riders find their way to the staircase.
It’s quite an intense slide for the speed it picks up coming into the bowl, and can leave you a little disoriented when swimming towards the staircase in the pool.
Pirate’s Plunge
The next slides to try were the two Pirate’s Plunge body slides, located at the very top of the main slide complex. Frankly, I have no fear when it comes to riding water slides, but this often changes when it comes to tunneled speed slides due to not being able to fully predict the experience! Adding on to the fact that these were the park’s tallest water slides did bring some fear for me to face, but I was glad to have done them because I ended up enjoying both pretty well! 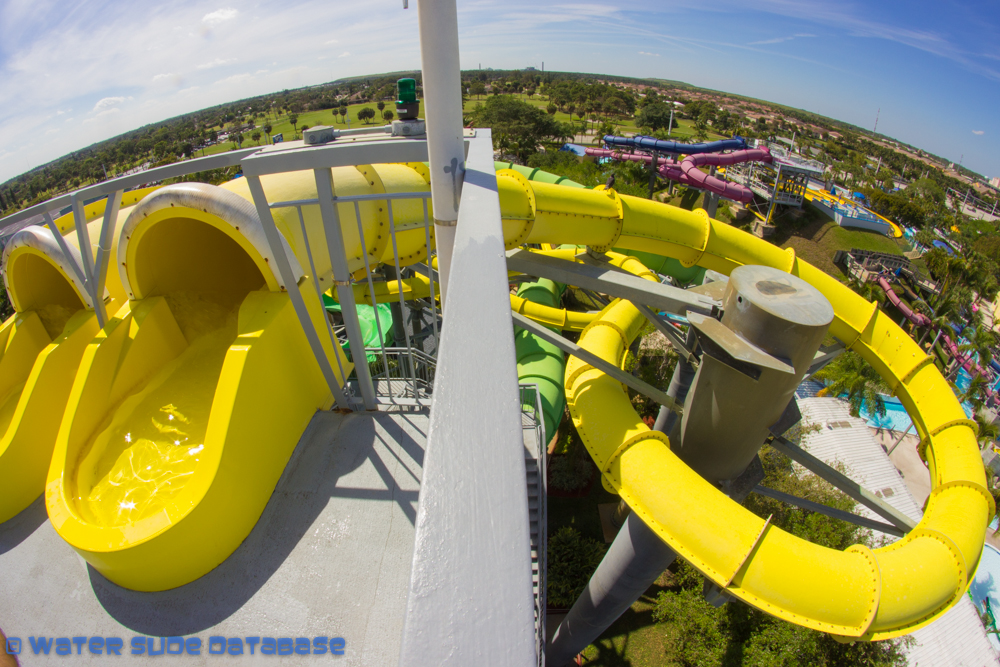 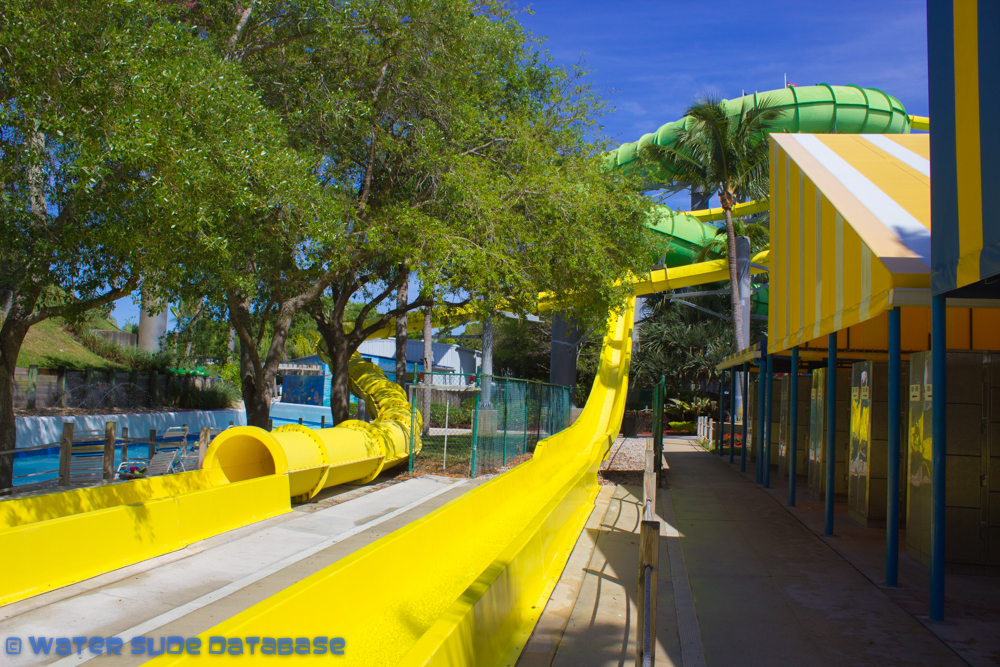 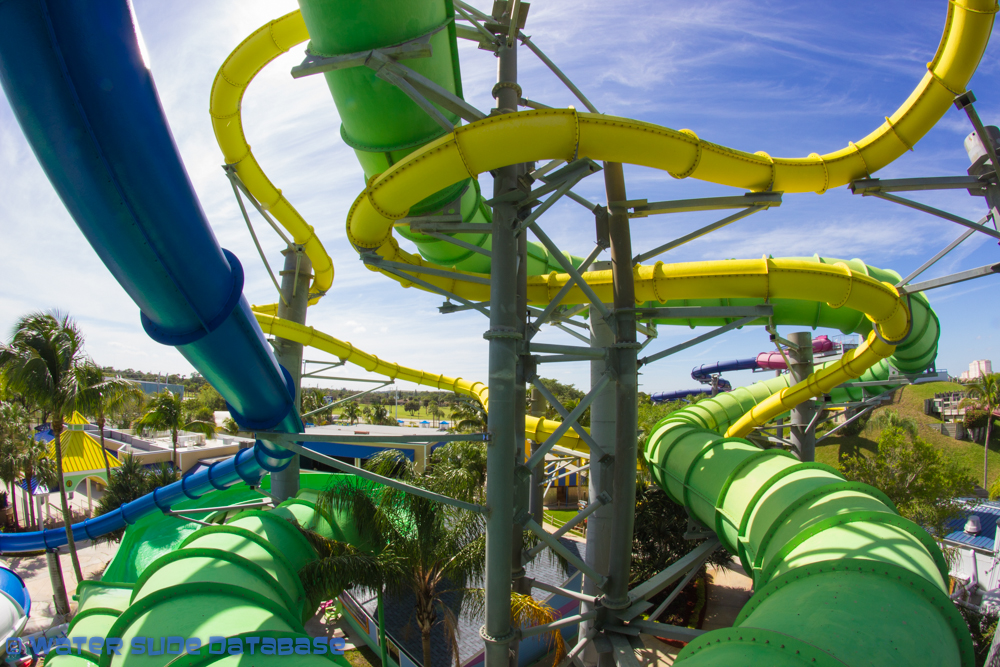 After ascending the lengthy staircase to the top, a fork on the platform separated the line for riders to choose whichever flume to go down. The flume on right consisted of a helix and a few easy left and right turns with air holes along the way allowing riders to see in parts of the tunnel. The flume then exited the tunnel portion and came to a sloped drop before ending in the long shutdown lane. The flume on the left had no drops along the way, but proved to be more intense due to the steepness of the curves and turns allowing greater speed along the course. Plus, the entire flume is done in complete darkness!
Both slides end parallel to each other in two very long shutdown lanes. Riders simply ride the entire length of it until they come to a slow before hopping out; no large splashes of any kind created!
Big Red 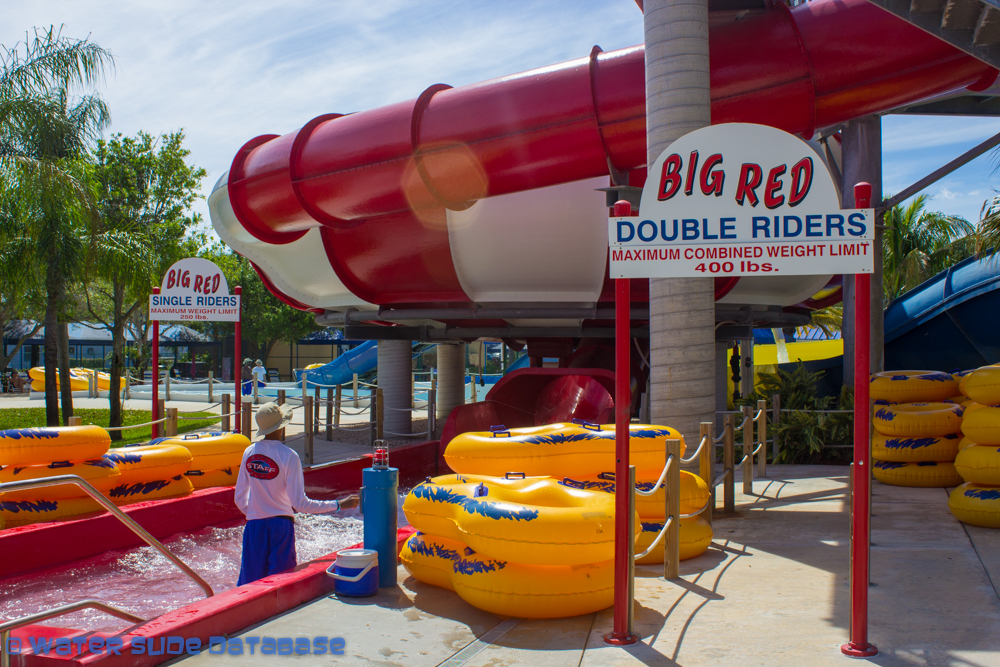 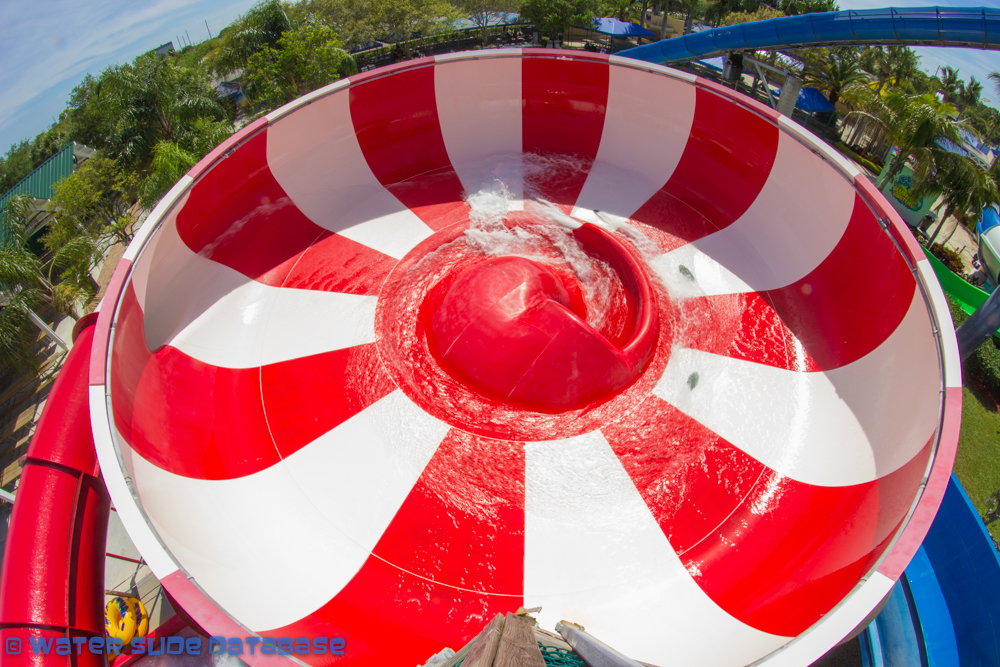 Big Red is the a fun and quick inner-tube bowl slide. It begins by entering the tunnel and giving a slow curve to the left, and then dropping and banking to the right to enter the bowl at a fast speed and giving a few revolutions around the inner perimeter. The slide ends with a tunnel that leads riders from the center into a drop before leveling out and splashing into a pool.
Body Blasters 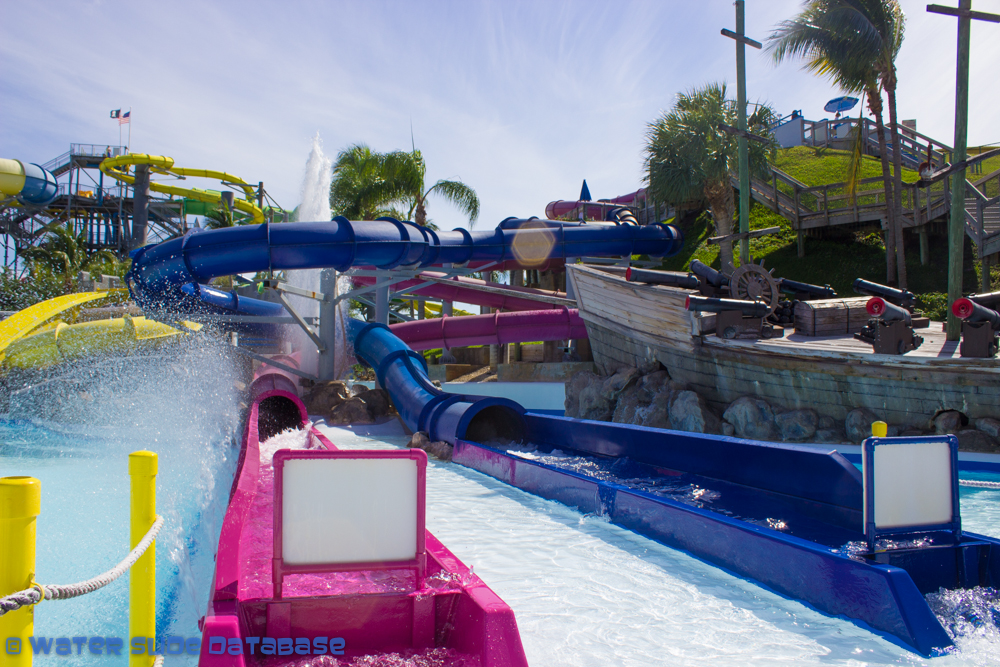 The Body Blasters are two standalone body slides that give multiple left and right sudden turns in complete darkness before giving a spectacular splash in the shutdown lane at the end. Nothing too special about these other than the sudden turns taken in the dark. Typically, these types of slides aren’t really my “cup of tea,” and my opinion on these two aren’t far from that.
Tubin’ Tornadoes 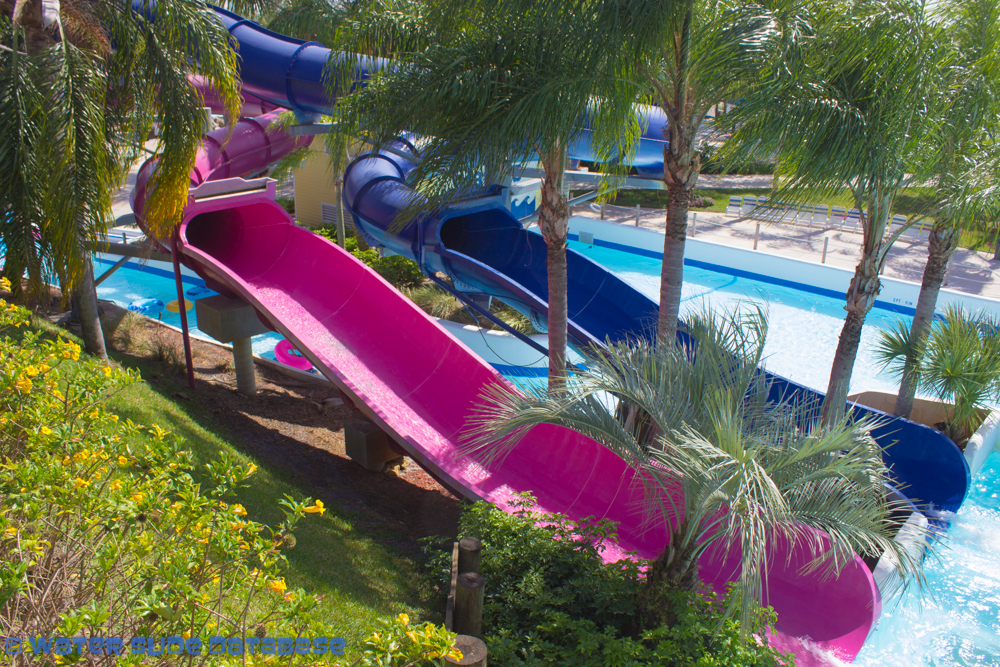 The last two slides I was able to ride were Tubin’ Tornadoes. These are two standard dark tunneled inner-tube slides that give left and right turns and a helix before coming out of the tunnel into a dip and splashing into the pool at the end.
All-in-all, the park has a collection of very exciting water attractions that could definitely fulfill an entire day’s worth spent at the park if you attempt to try as many slides as you can. Along with the park’s lineup of water slides includes a wave pool, a lazy river, a flowrider, two separate lilypad crossing pools, and two kids splash areas.
There were a few water slides I couldn’t get to because I didn’t have a partner with me to try them out, which included the two ProSlide tornado slides Big Thunder and Black Thunder, and the park’s two family raft slides Riptide Raftin’ and Ragin’ Rapids.
Still, with the slides ridden, the park proved to be quite fulfilling in terms of the amount of attractions it provided, and is definitely a destination worth checking out for those within the area!