Skip to content
Don’t advance any further until you’ve read the first part of the Disney Dream Cruise Review! Otherwise, enjoy!
(Note: A very photo-heavy report after the break!)

Early the next morning, the ship docked at the private island, Castaway Cay. While the majority of people immediately went to shore, I spent half of the day on the ship, taking in the opportune time to try out the ship’s Aquaduck water slide multiple times thanks to the short (and sometimes nonexistent) line! 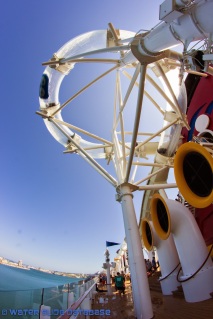 The Aquaduck is a water coaster built by WhiteWater West, and is the first water coaster to ever be put onto a cruise ship. After ascending the winding staircase, riders board a double-person inner-tube then are pushed onto the flume via a conveyor belt. From there, the slide does a small dip and enters the first glass section and performs a 270 degree helix to the left. Sliders then enter the first drop and are shot back uphill with water jets, cruise forward for a bit, then repeat it (along with an onride photo) before turning right and entering a enclosed starlight tunnel. After exiting the tunnel, riders make another right turn heading back towards the Aft side of the ship through a straight glass section. Once at the end, the slide dips again, makes a U-turn and comes to a close in the splashdown area where an lifeguard retrieves the raft to put in a lift to bring back to the top.
The slide itself isn’t anything overly thrilling, like those found on the Norwegian Breakaway ship, but the water coaster sections and the 765 foot length makes this slide pretty fun. If those aren’t enough, then the glass helix over the side and glass sections along the edges of the ship are enough to make it a pretty unique ride. Keep in mind that the height requirement for this slide is 54″ to ride alone, so those under that will have to find someone old enough to ride with them.
Soon, we ventured off-ship and onto Castaway Cay. A trolly took us on to the main part of the island where most people were around the beaches and in the water. Part of the beach includes the Pelican’s Plunge floating dock, which houses two body slides that require people to swim out to it (very deep water, but life vests are provided free of charge). The open flume slide has a longer course and consists of a few figure-eight turns, and the enclosed flume does a fast downward helix, both before dumping sliders right back into the water. The floating platform also has a miniature dump bucket and spray guns to aim towards targets placed on nearby rocks.

The main part of the beach was nice, with it’s white sand, free drinks and ice cream (like on the ship), and little touches of Disney theming here and there. There’s a lot of activities provided on the beach as well like snorkeling, parasailing, jet skiing, and even biking down trails that go deep into the island.

There was one part of the island that blew me away and required a separate trolly of its own. It took you down a lush trail before speeding down a long airstrip, coming to a stop at the opposite end to drop folks 18 years of age and older to a secluded corner of the island. This area included its own beach, plenty of cabanas and loungers, some hammocks, and a few stands to buy drinks at. What amazed me the most about this area was how the water was far more calm and somehow looked bluer than it did on the other location. For cruisers looking to get away from the crowds, this spot is definitely for them!

The next and last day was spent out at sea, slowly cruising towards Port Canaveral and not arriving until the following morning.
As I said in the first part of this review, this ship definitely impressed me with what it had to offer, plus the quality onboard the ship felt unmatched to any other ship I’ve been on. I felt that 3 days was almost plenty of time to take in what it had, but I wouldn’t mind doing the same cruise on a 4-day voyage so I would have more time to explore every aspect of the ship!
Ratings for slides ridden (N/A= Unavailable):
Aquaduck (Disney Dream Ship): 8/10
Pelican’s Plunge (Castaway Cay Island)(2): 7/10