The water park’s original lineup, after its renaming to Splashwater Kingdom and before it’s 4 year dormancy, included a basic slide complex with three inner-tube slides and a body slide, a ProSlide Tornado, a ProSlide Hydromagnetic water coaster, a water playground, a kids splash area, and a wave pool. When Kentucky Kingdom reopened for the 2014 season, the water park was put back to the original Hurricane Bay name and doubled in size with many brand new water slides added to the still-standing lineup. 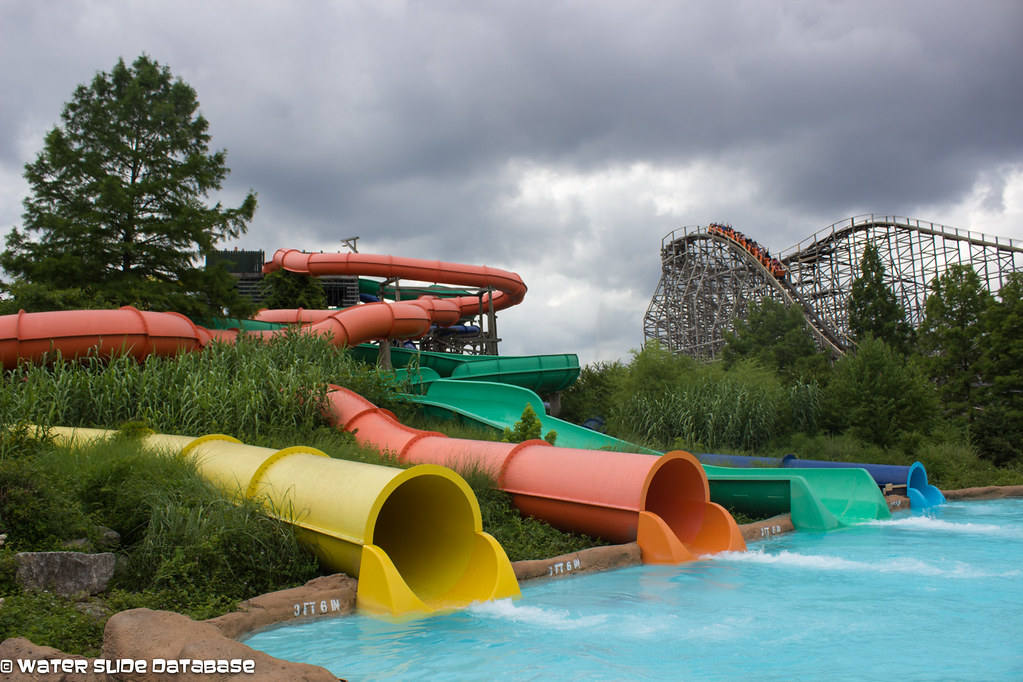 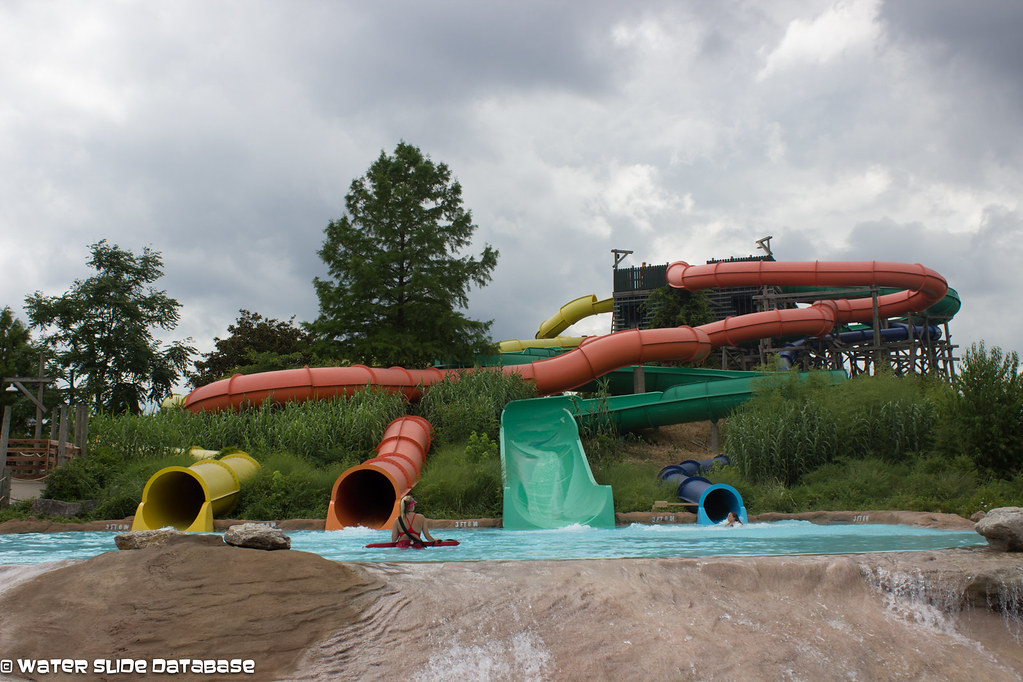 Starting with the original areas of the water park, Mt. Slide Hai is a water slide complex that houses four average water slides, three of which are inner tube slides and the fourth being a body slide. Two of the slides, Voodoo Express (orange) and Forbidden Passage (yellow), are pitch black inner-tube slides which wind and bend left and right in tight turns and multiple sudden dips before spitting riders out into a pool at the end. Conquistador canyon is a green inner-tube water slide that winds and bends much like the previous two slides, but is an open-roof flume which consists of wider turns. The last slide is Vanishing Falls, and it is a dark blue body slide that starts with a downward curve to the right before making a very quick s-bend curve and an extra large dip before launching riders into the pool shared by the previous three slides. 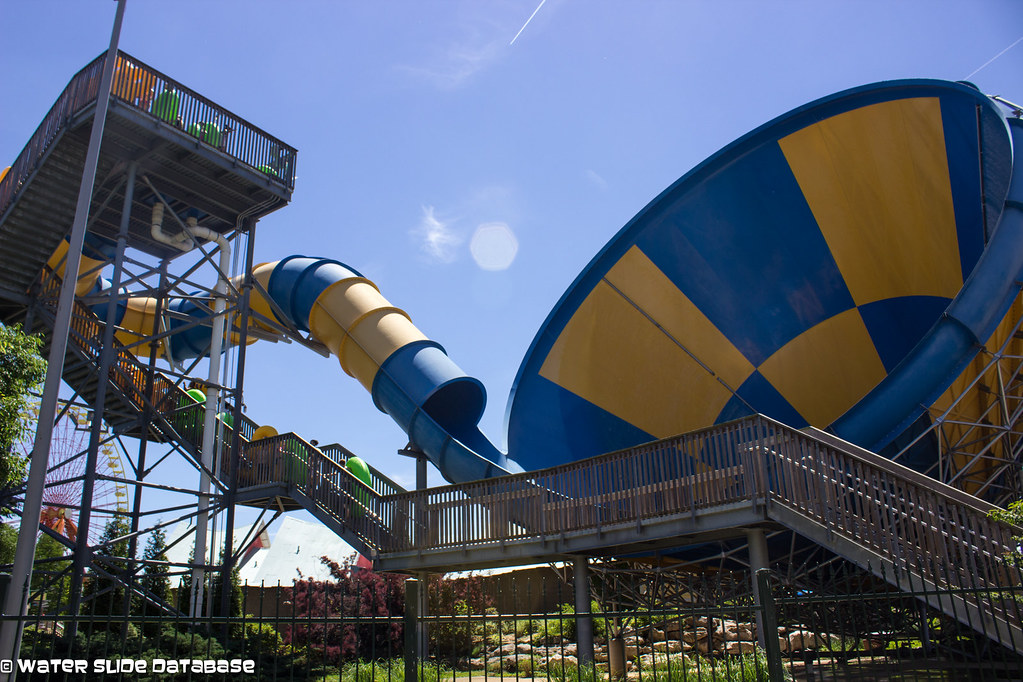 Tornado is the park’s self-titled ProSlide Tornado brand water slide, implemented in 2005. The ride utilizes a yellow cloverleaf raft for three to four riders, and a circular green-wheel raft for two riders. It starts with a u-turn from the platform tower, then drops straight into the funnel element completing multiple oscillations up and down the wall, creating multiple zero-g moments before coming to a pool at the end. This slide is quite popular with park go’ers, and can often have a lengthy (and hidden) line to grab a raft. 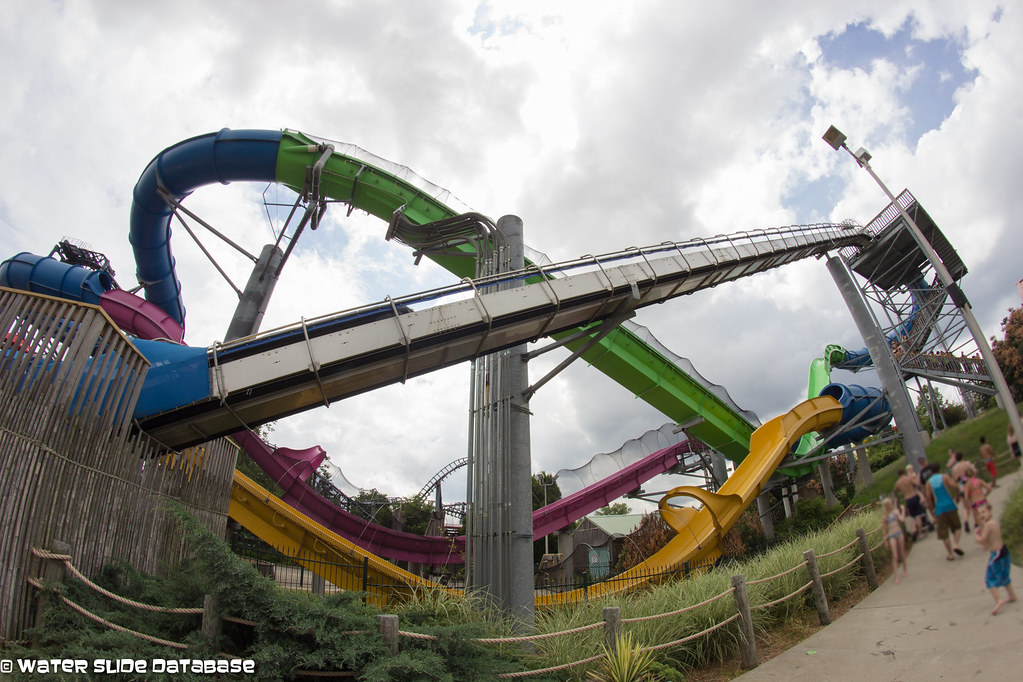 Deluge is the water park’s premier hydromagnetic water coaster built by ProSlide in 2007, which broke records for being the tallest, longest, and fastest hydromagnetic water coaster in America when it opened. Riders climb stairs to the top before boarding the four-person inline raft that would send them out into the flume via conveyor belt. After an initial u-turn, the raft goes down a large steep drop followed by a large LIM powered uphill section. The ride makes a right before changing to a leftward helix, then completes a second drop and upward section in the opposite direction of the first drop. The ride completes a right u-turn into two bunny hills, before performing a left u-turn into a small dip, and finishes onto a conveyor belt on an exit platform where riders disembark.

Deluge is an exciting water coaster. While it doesn’t match to the intensity (or length) of a water coaster such as Wildebeest at Holiday World, it still stands out as quite the crowd pleaser, and is a must-ride for anyone visiting the water park. 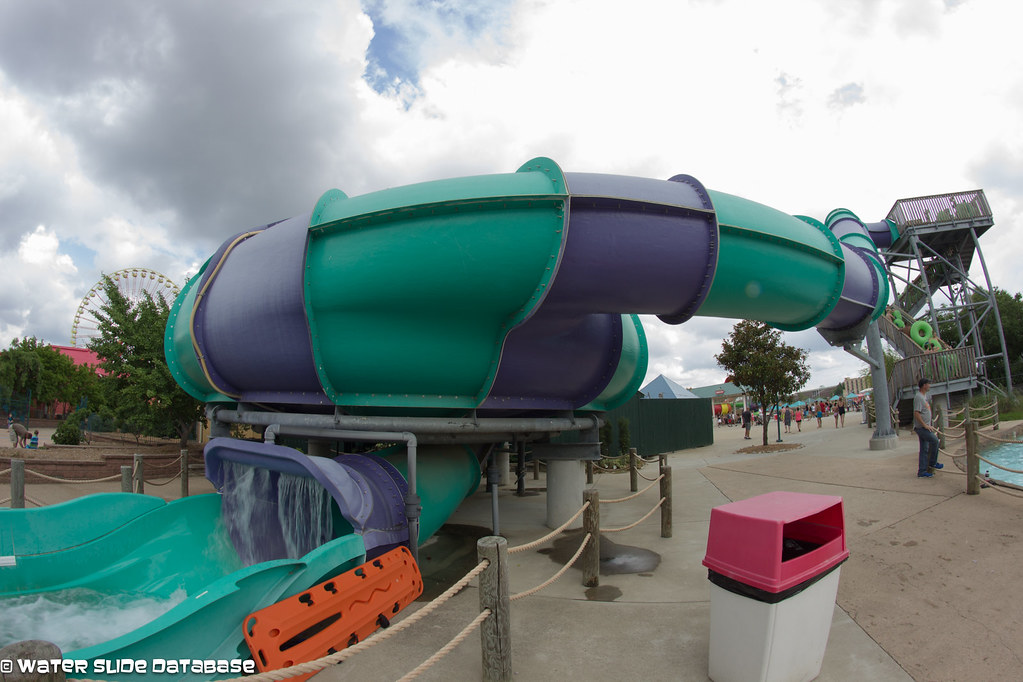 In the lesser of thrills, Mega Wedgie is a ProSlide BulletBowl brand water slide located next to the park’s Splash Zone water playground. After grabbing a single-person inner-tube and climbing to the top of the starting platform, riders coast into a tunnel, bank left, and enter a downward dip before turning right and being shot out into the bowl. They complete multiple revolutions around the perimeter of the bowl before reaching the center and exiting into a dip before splashing into a pool.

These were part of the original collection of slides and attractions along with the Castaway Creek lazy river, Big Surf wave pool, Splash Zone water playground, and Buccaneer Beach water playground. Following the park’s 4-year dormancy, many new slides (all built by ProSlide) and new attractions were added to the lineup, and the water park was doubled in size! The new additions included two new speed slides, an inner-tube slide complex, and a family raft slide along with a new river and wave pool. 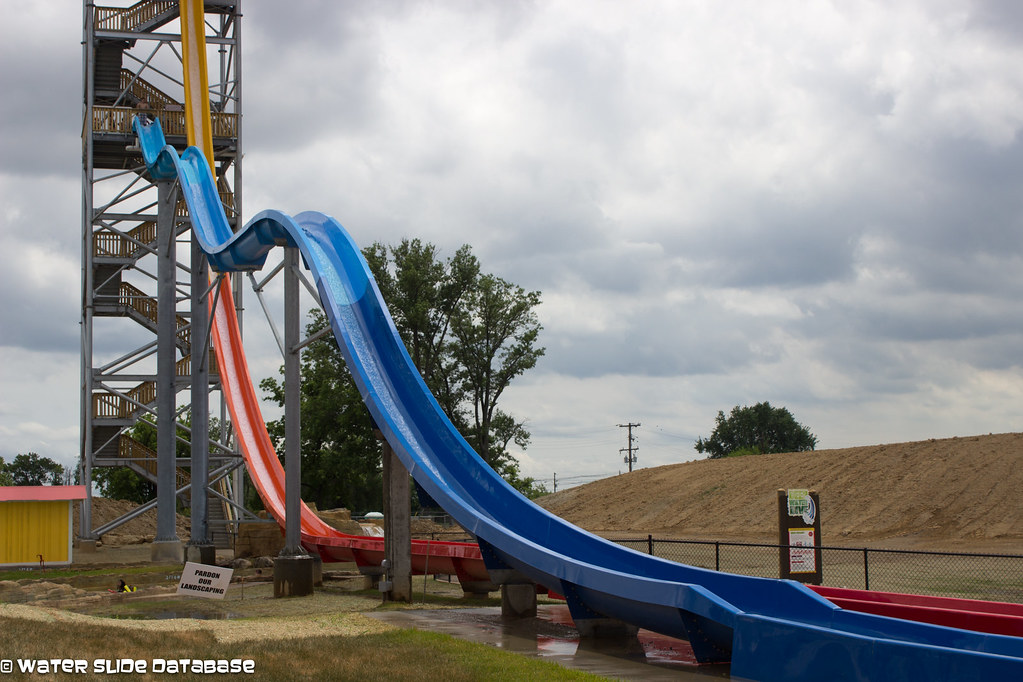 The most notable installation is the speed slide tower with two body slides attached, Deep Water Dive and Wave Runner. Wave Runner is a triple-dip body speed slide that starts about 66 feet up the tower. Riders push themselves off and descend down an initial slope, gradually picking up speeds while going over two large humps and receiving a bit of airtime on the last hump. Wave Runner is a surprisingly gentle water slide, considering its height and the speed riders pick up on the way down. Nevertheless, it’s a fun slide, and is actually my favorite body slide in the park due to it relatively shorter height and the quicker-paced line for it.
One thing guests to the water park will pick up on is that Wave Runner is also known to serve as an excellent chicken-out slide for the next water slide far above it. 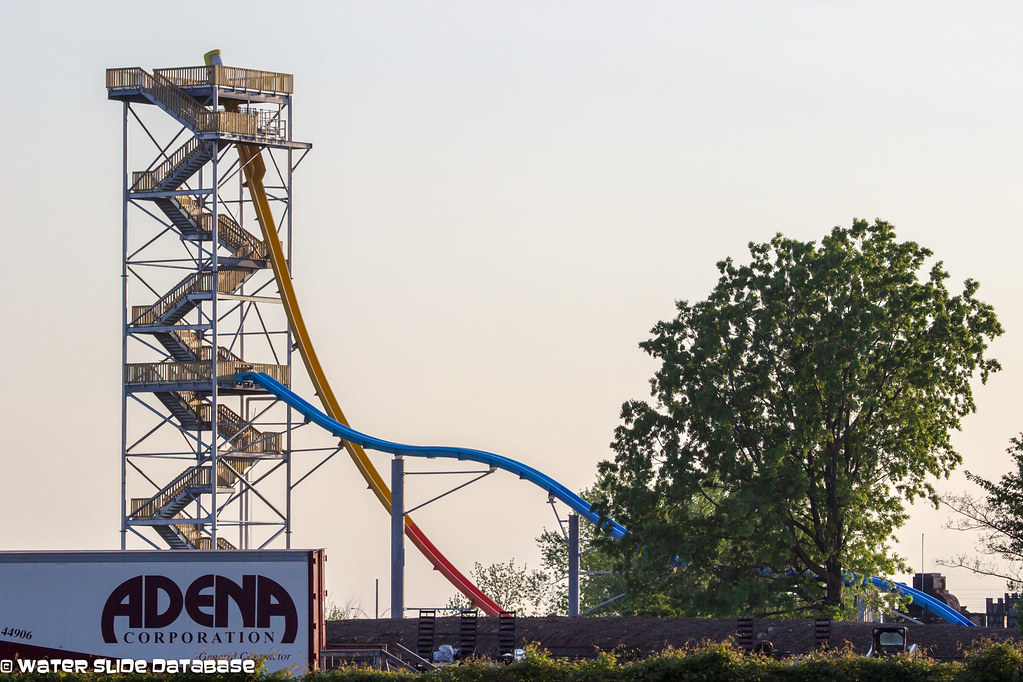 Imagine Summit Plummet at Walt Disney World’s Blizzard Beach. Now, remove the ski-lift, remove the mountain, remove the snow, add one foot to the height, and add a drop capsule.

Deep Water Dive is a 70 degree drop capsule free-fall body slide that starts at the top of the tower, about 121 feet off of the ground. That extra foot above Summit Plummet’s height puts it as the tallest body slide in North America, and (to my understanding) the tallest drop-capsule slide in the world. After riders ascend the stairs to the top of the tower (and after catching their breath… yes, it is a long way up!), riders get great views of the nearby airport, downtown Louisville in the distance, Churchill Downs, Cardinal football stadium, and many other parts of the Louisville area.

Riders step into a capsule, greeted by a female automated voice and heartbeats. After the capsule door shuts, another automated voice counts down from three, before the floor gives-way and the rider plummets through a wall of water and down the steep slope at very, very fast speeds. The slide gently levels out and riders come to a very smooth and spectacular stop in the shut-down lane, to where they then disembark.

The slide is quite intimidating to most riders, mostly because of its height and the drop capsule portion of the slide. Luckily it’s a very smooth experience. The only discomfort one might get from the slide is the amount of water rushing past them, but it’s usually a minor instance. Deep Water Dive is very re-rideable… if you’re willing to make the trek back up the stairs! 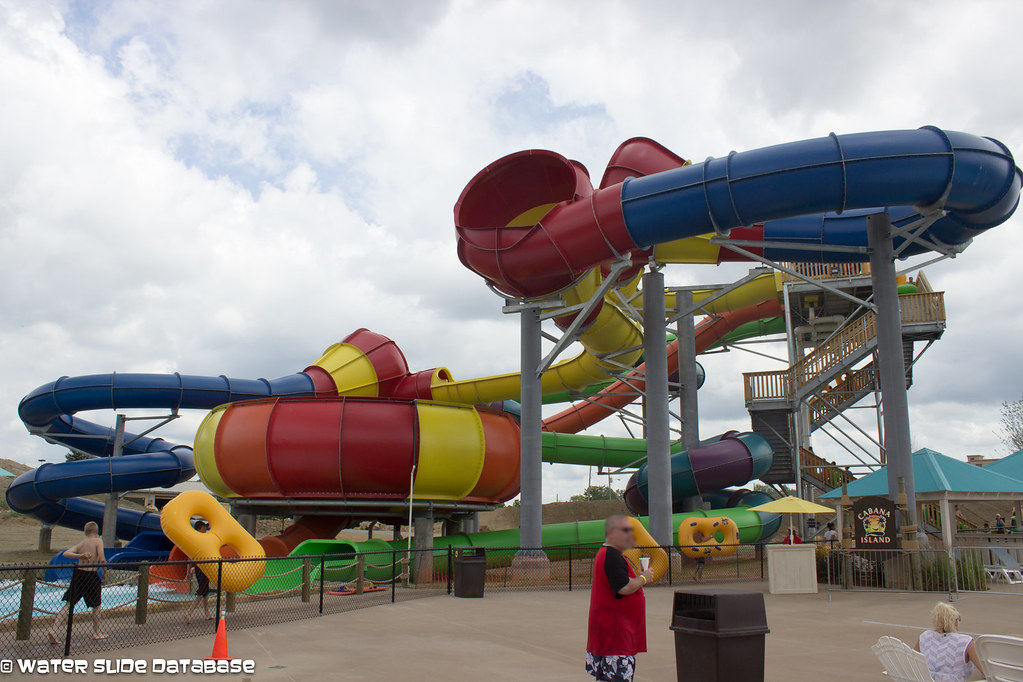 Among the new slides the park received includes the Wikiwiki Wai inner-tube slide complex, which includes three ProSlide specialty slides. The first on the far right is the Kilawaya, which is an enclosed “Explosion Flume” style slide that completes three tight helixes in opposing directions before dumping riders into the pool at the end. The Explosion Flume sections are similar to WhiteWater West’s Constrictor slide, where the radius of the tunnel widens for each 360 degree helix. 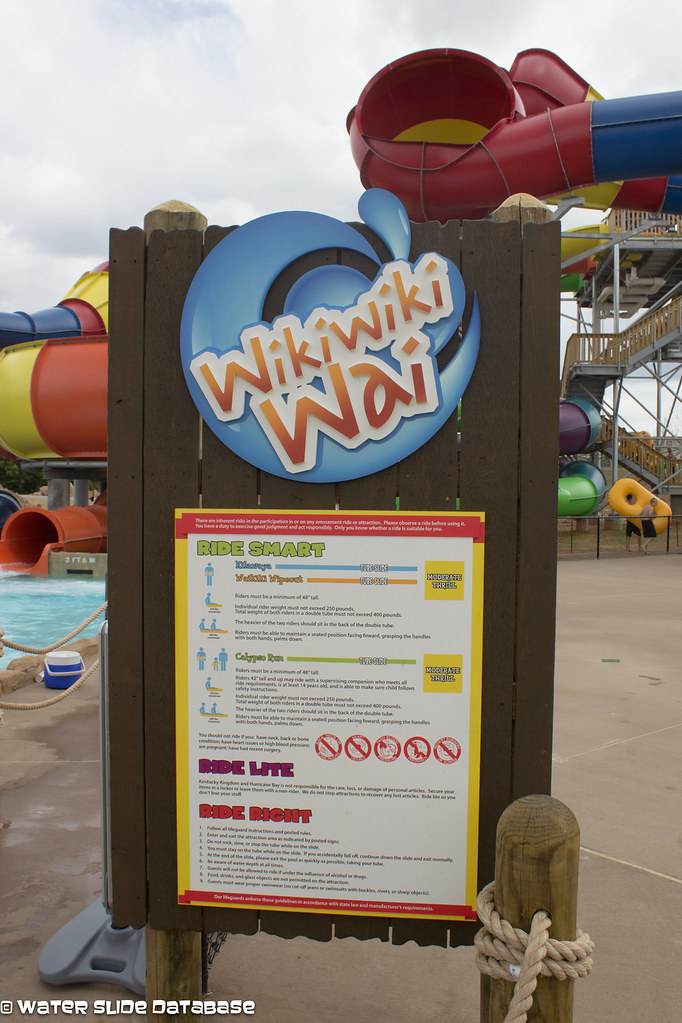 The center slide is a ProSlide CannonBOWL slide named Waikiki Wipeout. This slide is similar to Mega Wedgie, except larger and slightly faster. Riders come down a sloped drop gradually banking to the left before being shot out into the bowl to complete multiple revolutions around the inner perimeter. The slide ends with riders coming to the center and exiting down a small dip out of the bowl and into the pool at the end. The last slide that’s on the far left is Calypso Run. This is a ProSlide Tornado 12 (Formerly known as a TopsyTurvy slide) and has 3 funnel sections along the flume. After the third funnel section, riders come into a fast helix before coming into the pool at the end.

All of these slides provide different experiences, though the favorite tends to be Calypso Run due to its slightly longer layout and the fact that the funnel sections can send a rider backwards. 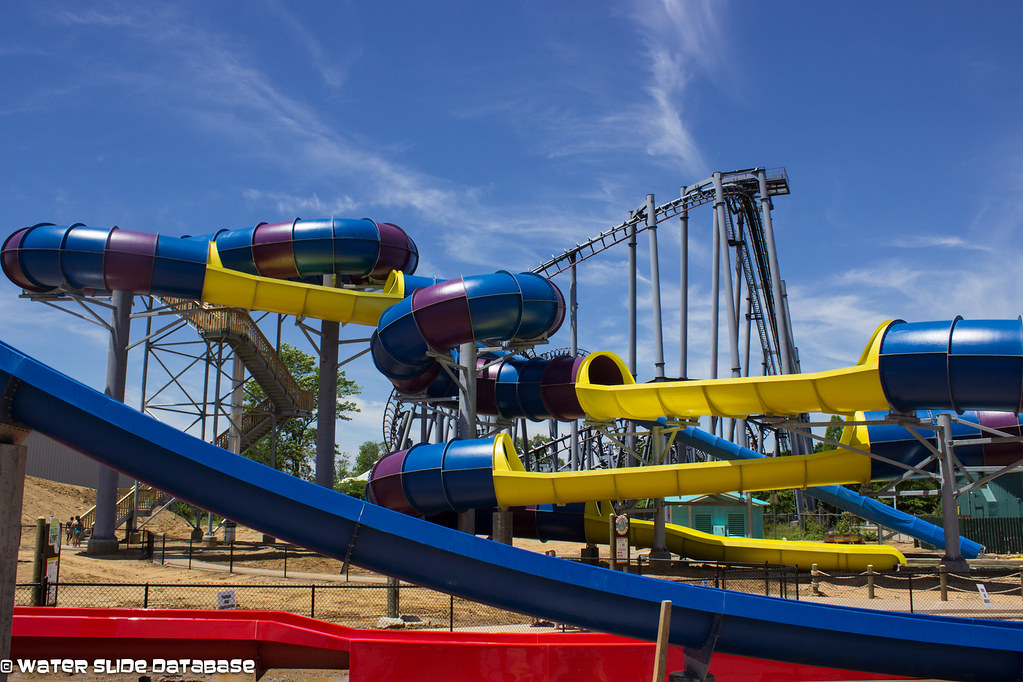 Plummet Summit is the park’s first circular raft family slide, and consists of multiple tight turns in a quick and compact course. I have yet to ride this slide myself so I can’t speak about the experience, but I have noticed that riders tend to get high bankings on the walls of the flume due to the speedy and tight course!

The new Adventure River is similar to a lazy river, only instead of using inner-tubes riders use nearby pool noodles and floaters. The river flows around the expanded section of Hurricane Bay, and snakes its way directly under the park’s two new speed slides Wave Runner and Deep Water Dive. Also the new Family Wave Lagoon is similar to the park’s current wave pool, only it has smaller waves that can be enjoyed by smaller children thanks to the shallower water and smaller waves produced.

Almost similarly to the dry side of the park, there are some minor navigational issues when someone is trying to find your way to certain attractions. One good example is finding the entrance to Deluge, due to its location behind the wave pool and not having a completely clear route to it.

Hurricane Bay’s new expanded form makes it something that must be experienced for any new visitors to the park. It’s roughly half the size of the entire park on its own, and provides plenty of fun and thrilling slides for families and thrill seekers to enjoy. From the crowd-pleasers like Deluge and Tornado, to head-turners like Deep Water Dive, to family favorites like the Wikiwiki Wai slide, there’s enough slides in the water park (combined with the rides in the dry section of the park) to make a visit to Kentucky Kingdom much more worth the price of admission. 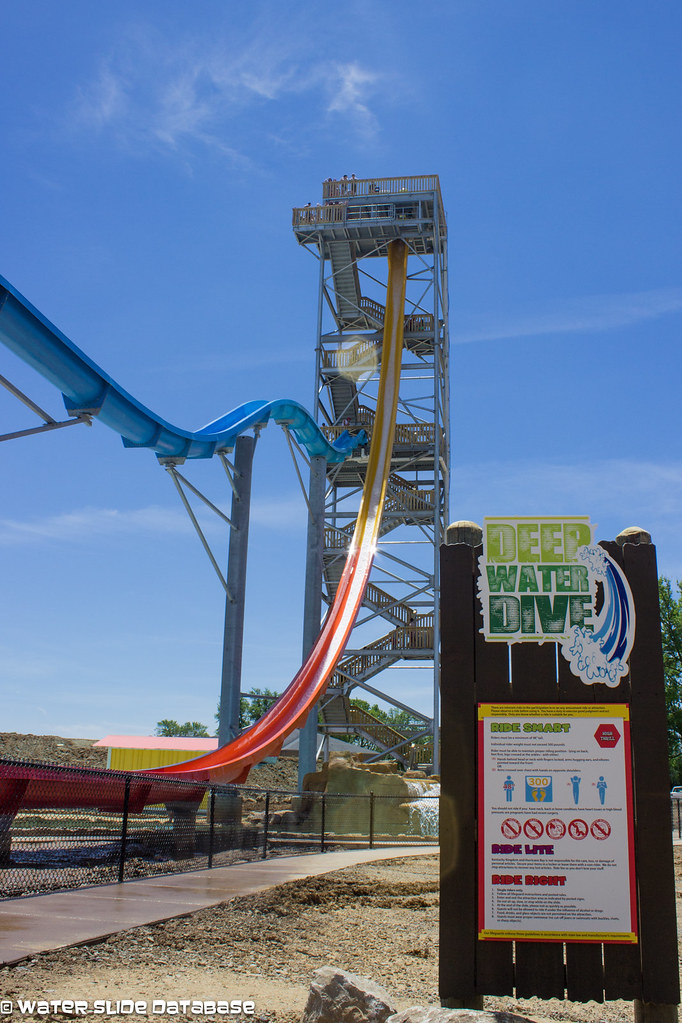 One thought on “Kentucky Kingdom – Part 2 of 2”