It’s been 5 years since the last time I was at Adventure Island. Armed with a Sanyo waterproof camcorder, this was one of the earliest water parks I had ever documented for Water Slide Database back in 2010! This time I come prepared with a DSLR and GoPro Hero4.

Adventure Island is a large water park located in Tampa Bay, Florida, and is across the street from a world-class African-themed zoo/theme park, Busch Gardens Tampa!

Adventure Island contains a variety of attractions from the expected like a wave pool and lazy river, to the not-so expected like a 20 foot cliff jump into water or a water slide with two mid-course pools. The water park stands out quite a bit because of its selection of older and newer attractions and slides. Plus the large amount of shade and foliage makes walking around the park on a bright and sunny day much more manageable.

The park has 14 standalone water slides total, not including flumes that are connected to or beside each other (which would bring the number to 23)!

These slides range from gentle such as Runaway Rapids, Calypso Coaster, and Key West Rapids, to the more intermediate slides such as Riptide, Caribbean Corkscrew, and Water Moccasin. Other slides include two family raft rides, a ProSlide OctopusRACER belly mat slide, 5 open-flume body slides, and a toboggan slide that skips riders on top of water!

Along with these include two water playgrounds (one with two slides), a wave pool, a lazy river, a splash pool with lily pad crossing, a 20 foot cliff jump into water, and two drop slides.

Runaway Rapids are five standalone body slides that intertwine with each other while weaving in and out of an artificial rock mountain. The slide is very gentle and enjoyable, especially for kids, while still having enough distance and turns for the older folks to not mind trying as well. The only downsides to Runaway Rapids that day were that they had some of the longest waits in the park, and getting to the slides were quite confusing due to there being no clear entrance or directional signs leading to the slides. 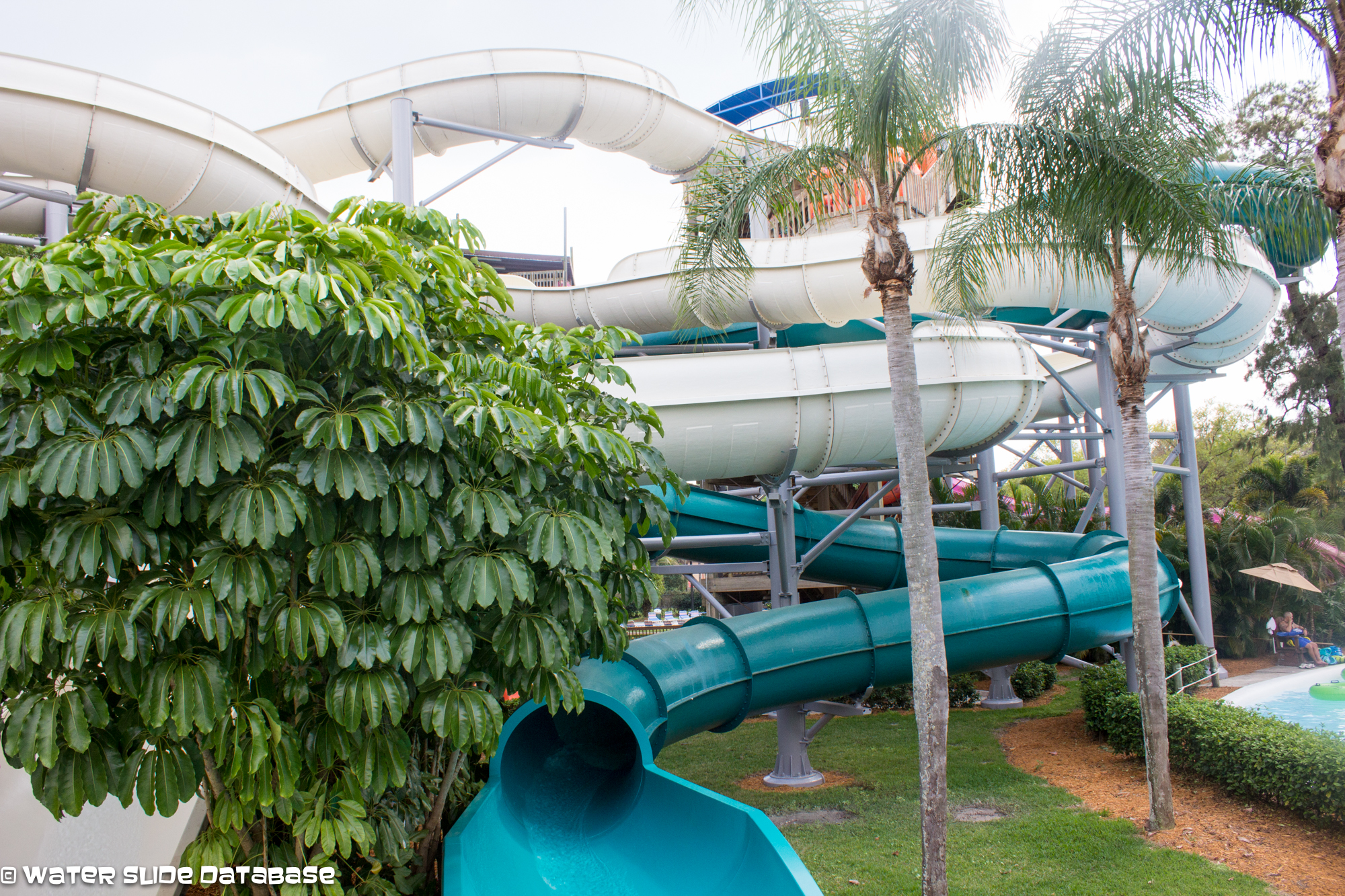 Aruba Tuba and Calypso Coaster are two average inner-tube slides that share the same starting platform and consist of various easy left and right turns and small dips along their courses. The difference between the two are that Calypso Coaster is an easy open flume slide, and Aruba Tuba is a slightly faster and mostly enclosed water slide with many sections along the way where the ceiling is open. 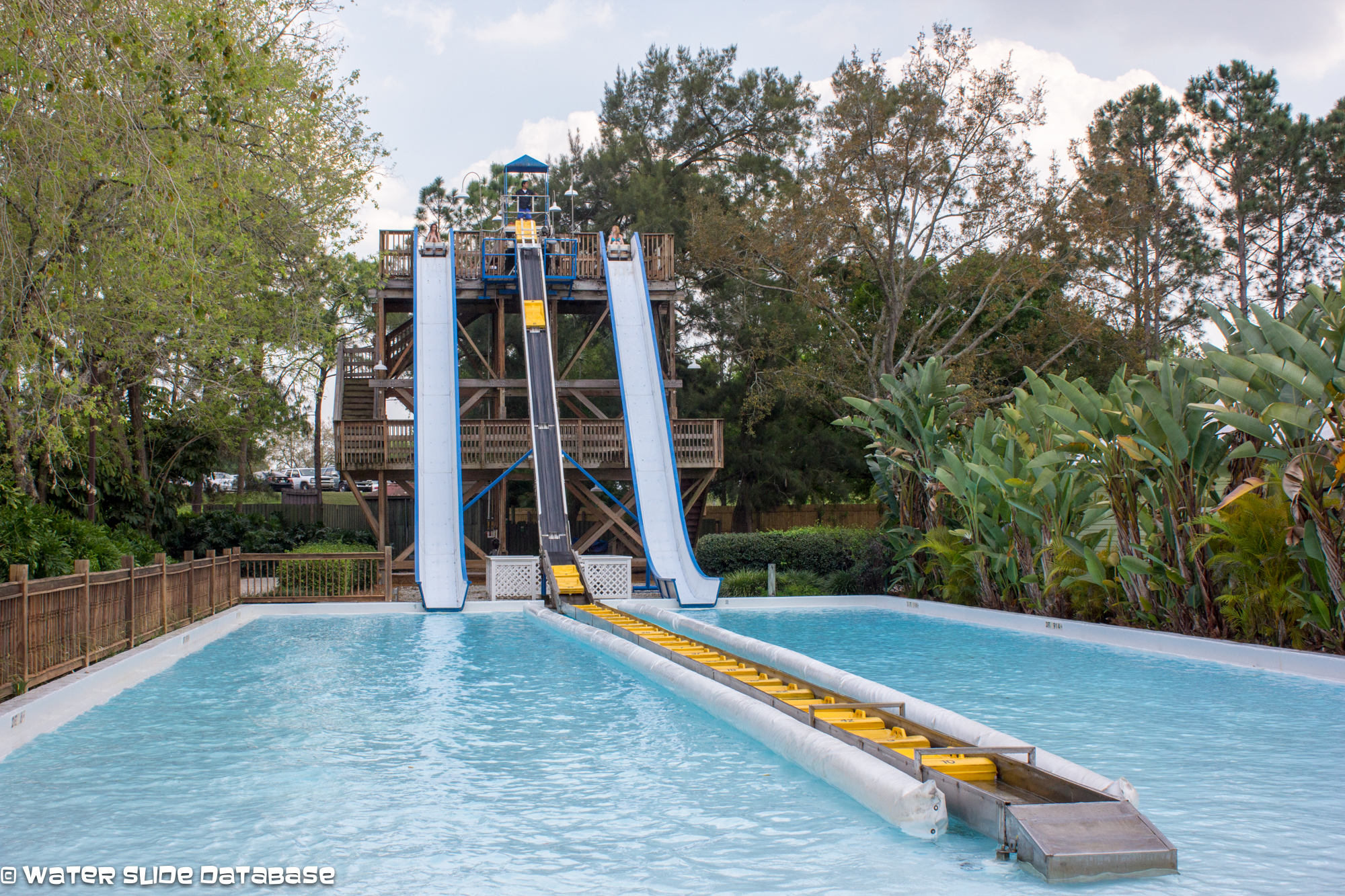 One of the park’s most unique slides is the Everglides. This ride starts with two riders boarding their small, yellow, hard plastic toboggans to which the operator then throws a switch that tilts both riders forward, causing them to slide down onto a steep decline. The ride then levels out and shoots the riders horizontally across the water, to which both then skids across the pool parallel to each other for roughly 20 yards before coming to a stop near the opposite end. It’s a surprisingly exciting and quick slide in which kids and adults equally enjoy! 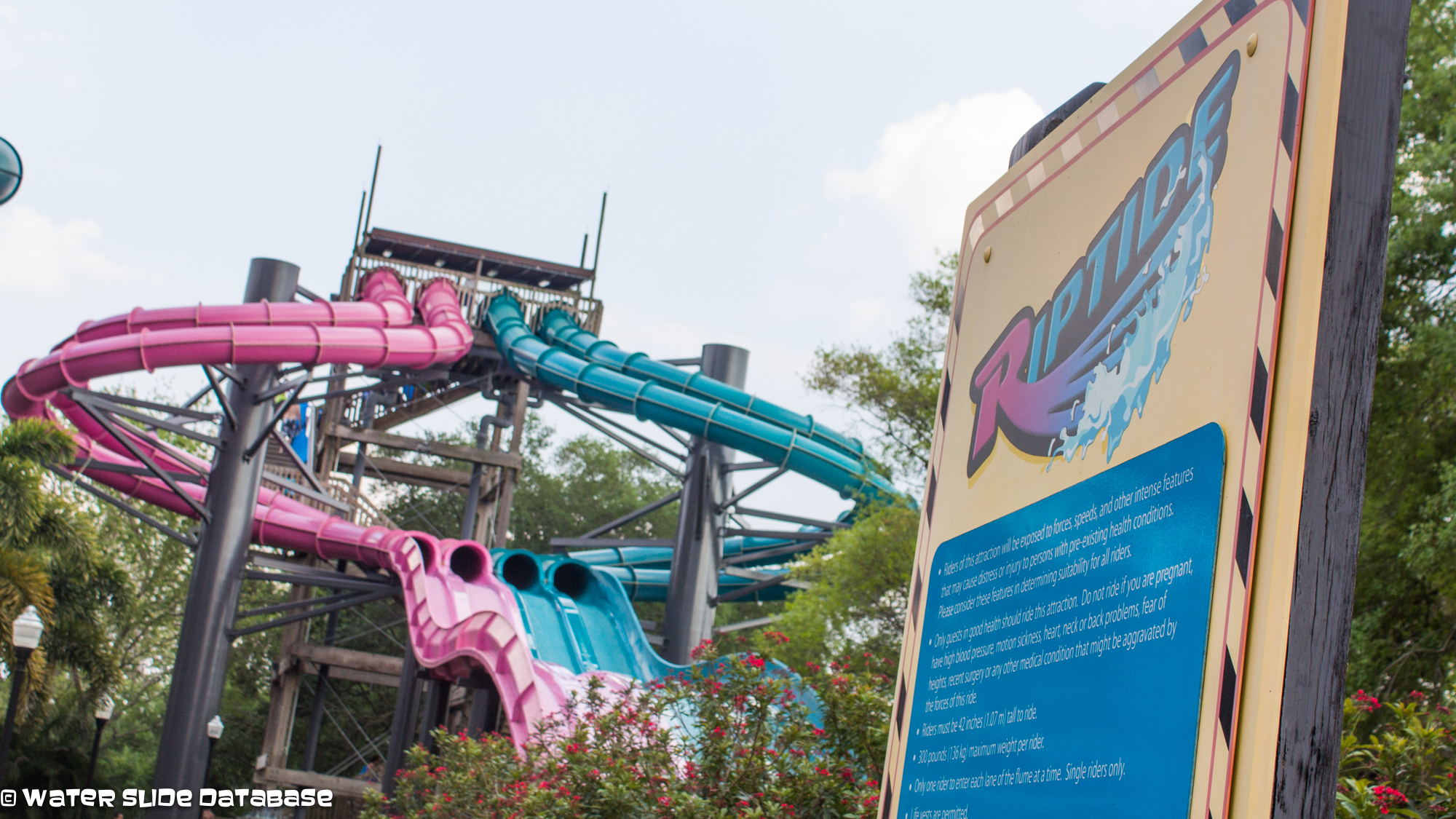 Towards the far back corner of the park sits the ProSlide-brand OctopusRACER slide, Riptide! This four-lane belly mat racer slide starts with the lifeguard giving a countdown before riders leap into their designated tunnels. Riders then go into four separate helixes opposite of each other before rejoining side-by-side, exiting their tunnels and going into a double-down towards the shutdown lane. 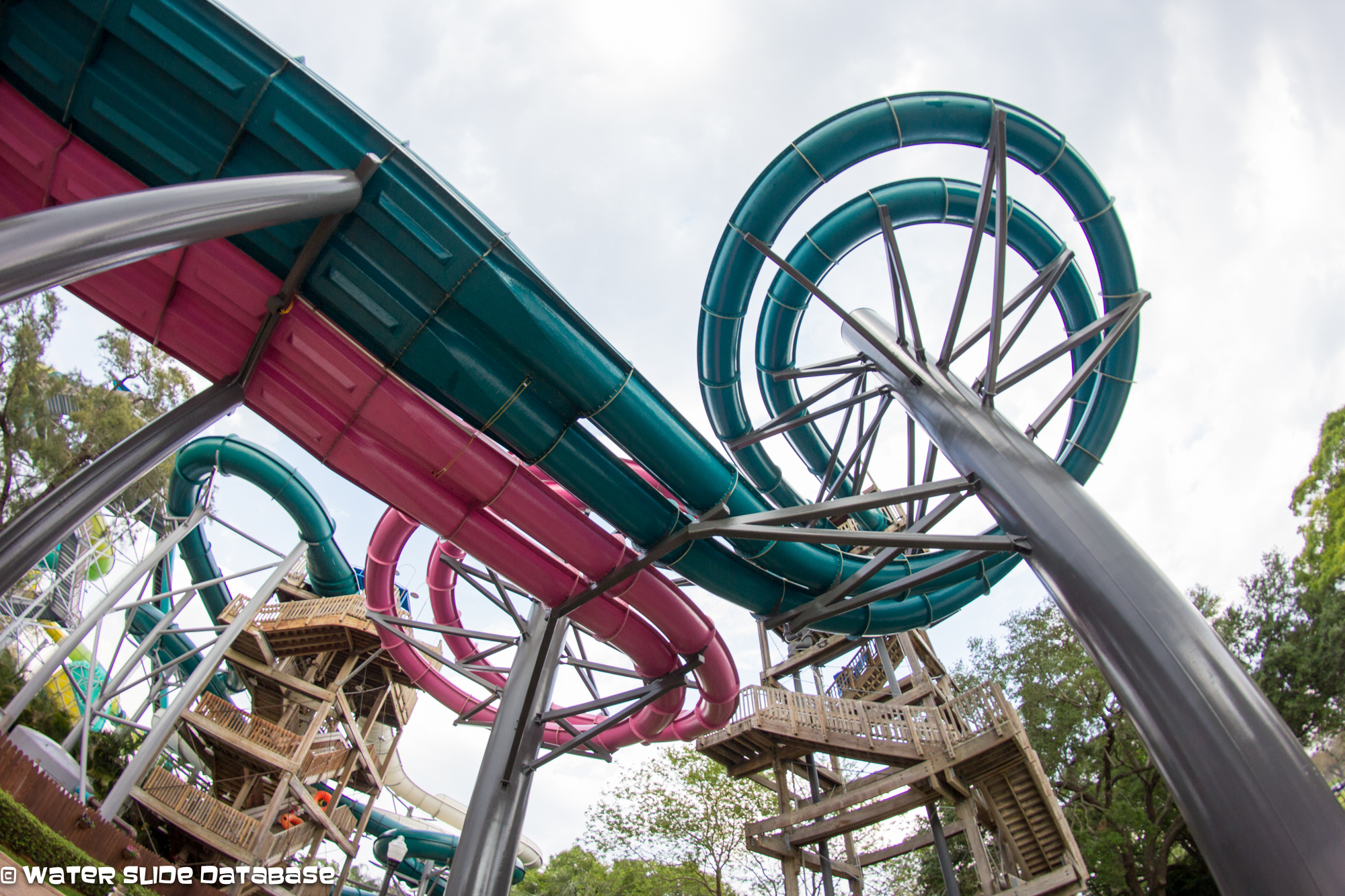 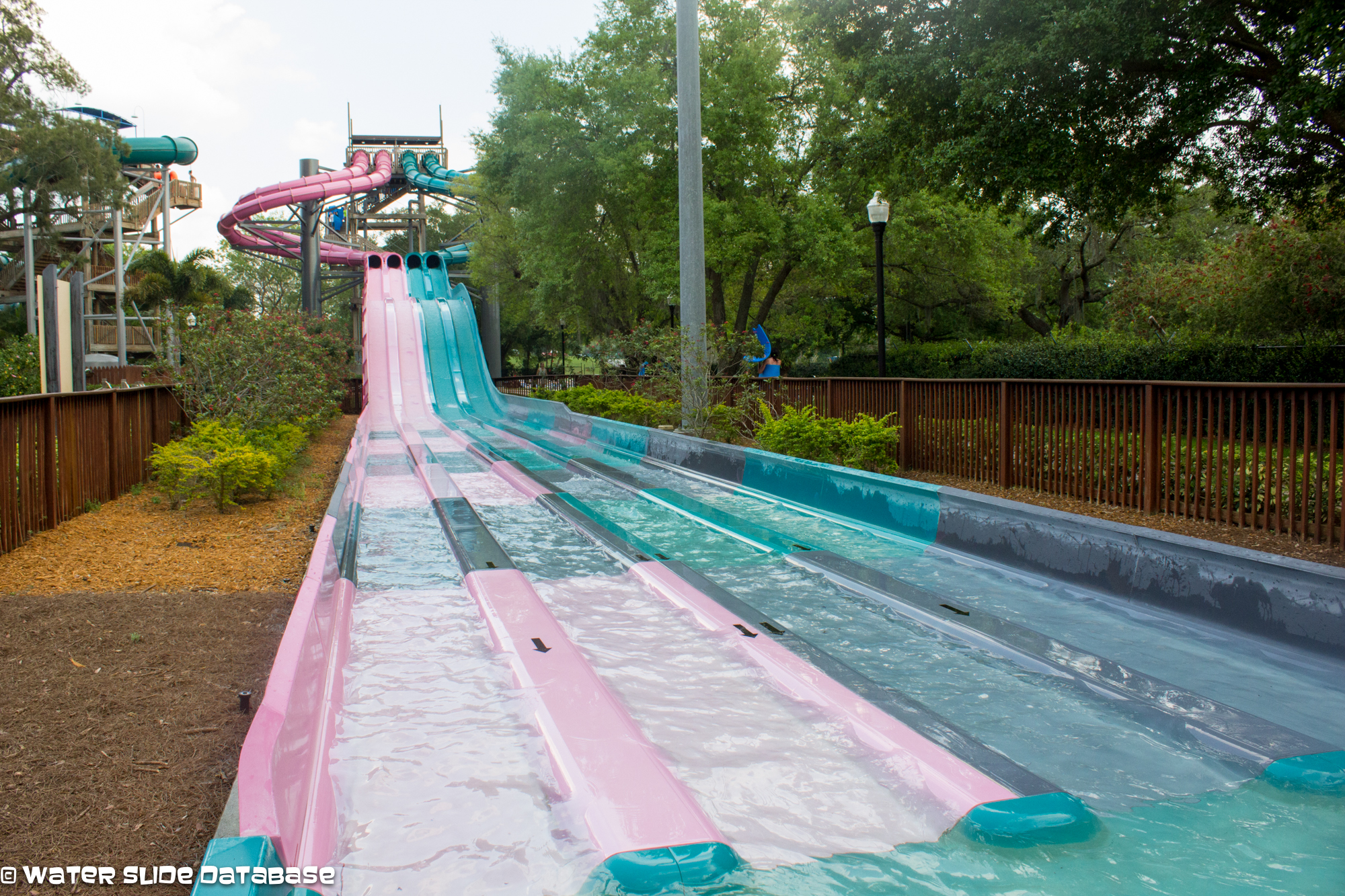 Riptide is one of the park’s more exciting water slides due to being able to race three other sliders down the high-speed flume to see who will make it to the end first. The helix on each flume also produce an impressive amount of positive g-forces, as well as the following double-down producing small pops of airtime if a rider goes fast enough! This slide is sure to please the thrill seekers for the speed, as well as the gentle riders for being a very “in-control” and easily re-ridable slide! 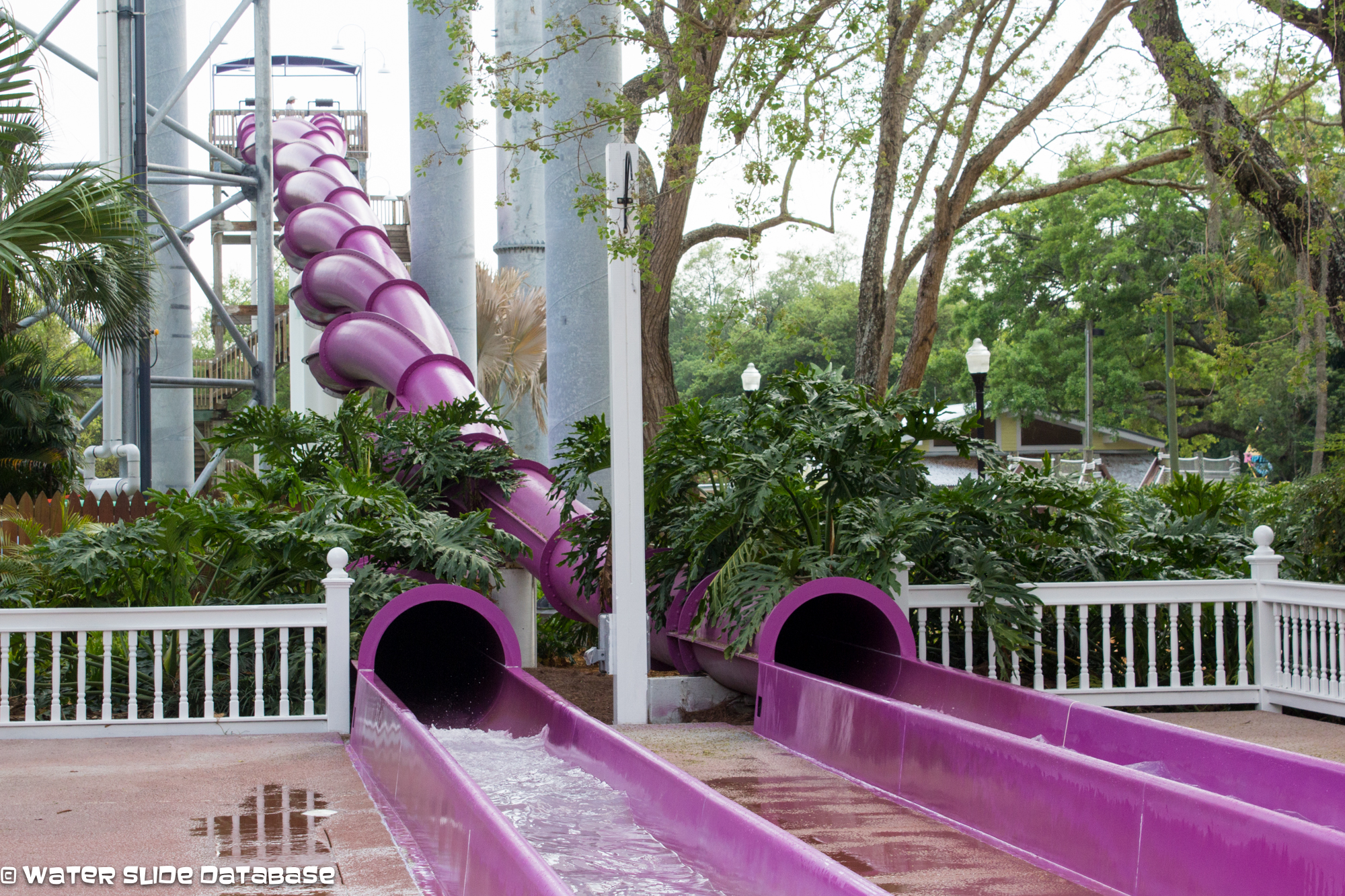 Near Riptide sits some of the park’s few speed slides.
Caribbean Corkscrew are two purple enclosed body slides that simply warp around each other in a long spiral, making its way towards the shutdown lane at the end.

Do not be fooled by its gentle slope, for this slide can get riders picking up quite a bit of speed on the way down, becoming wilder with every drop and curve as they progress toward the end for a spectacular finale. It’s a fun and thrilling slide that’s a worth a try for those looking for an out-of-control thrill! 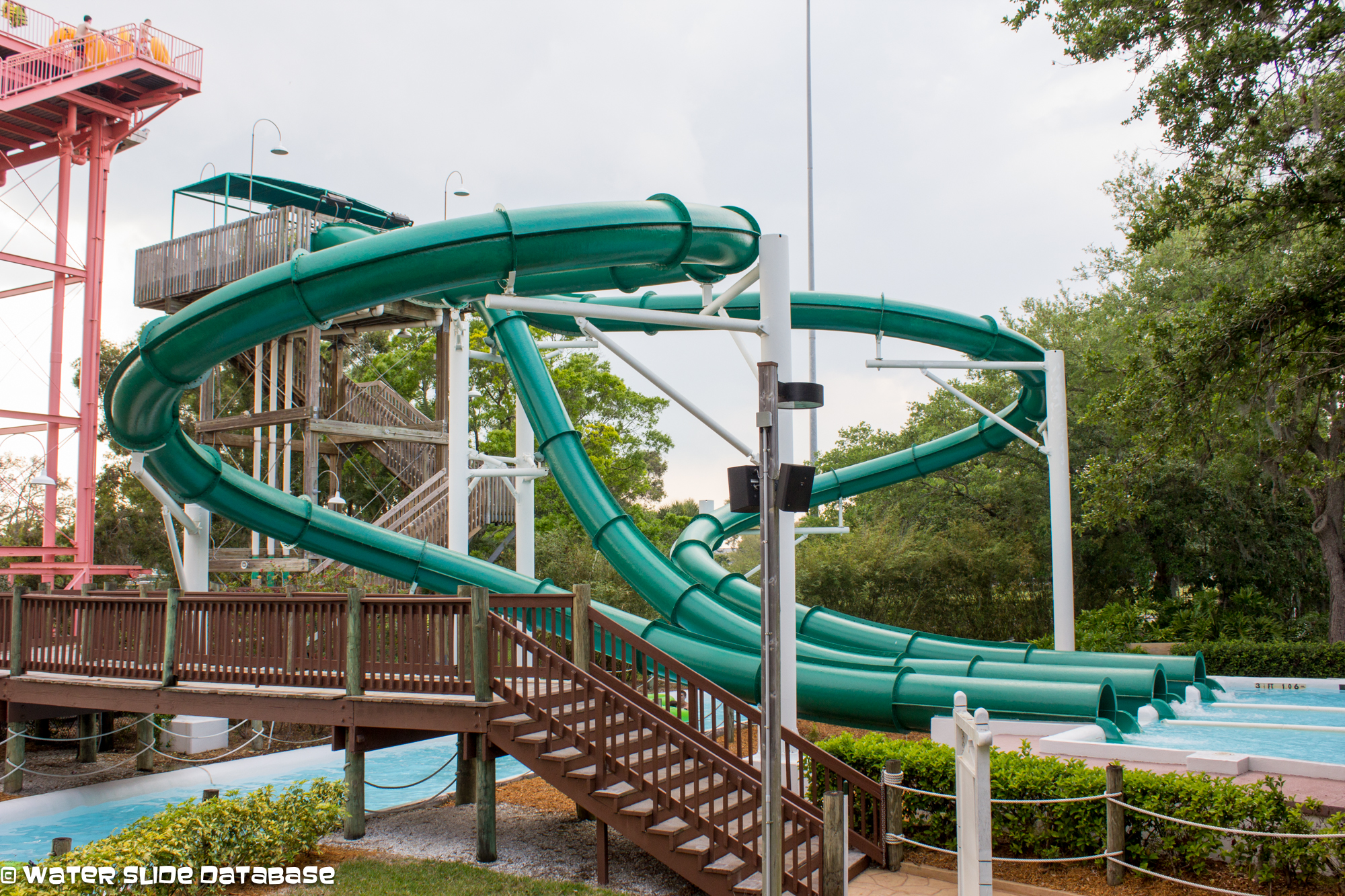 Water Moccasin are the park’s last three enclosed speed body slides. The center slide makes steep drop giving brief airtime before quickly leveling out and shooting the rider out towards the pool, while the two slides on the ends perform a gradual steep helix before shooting the rider out parallel with each other into the same pool. While these slides offer short, simple thrills, they suffered from having harsh seams and tiny gaps between flume connections, causing water leakage and uncomfortable back scratching; especially on the center freefall slide. 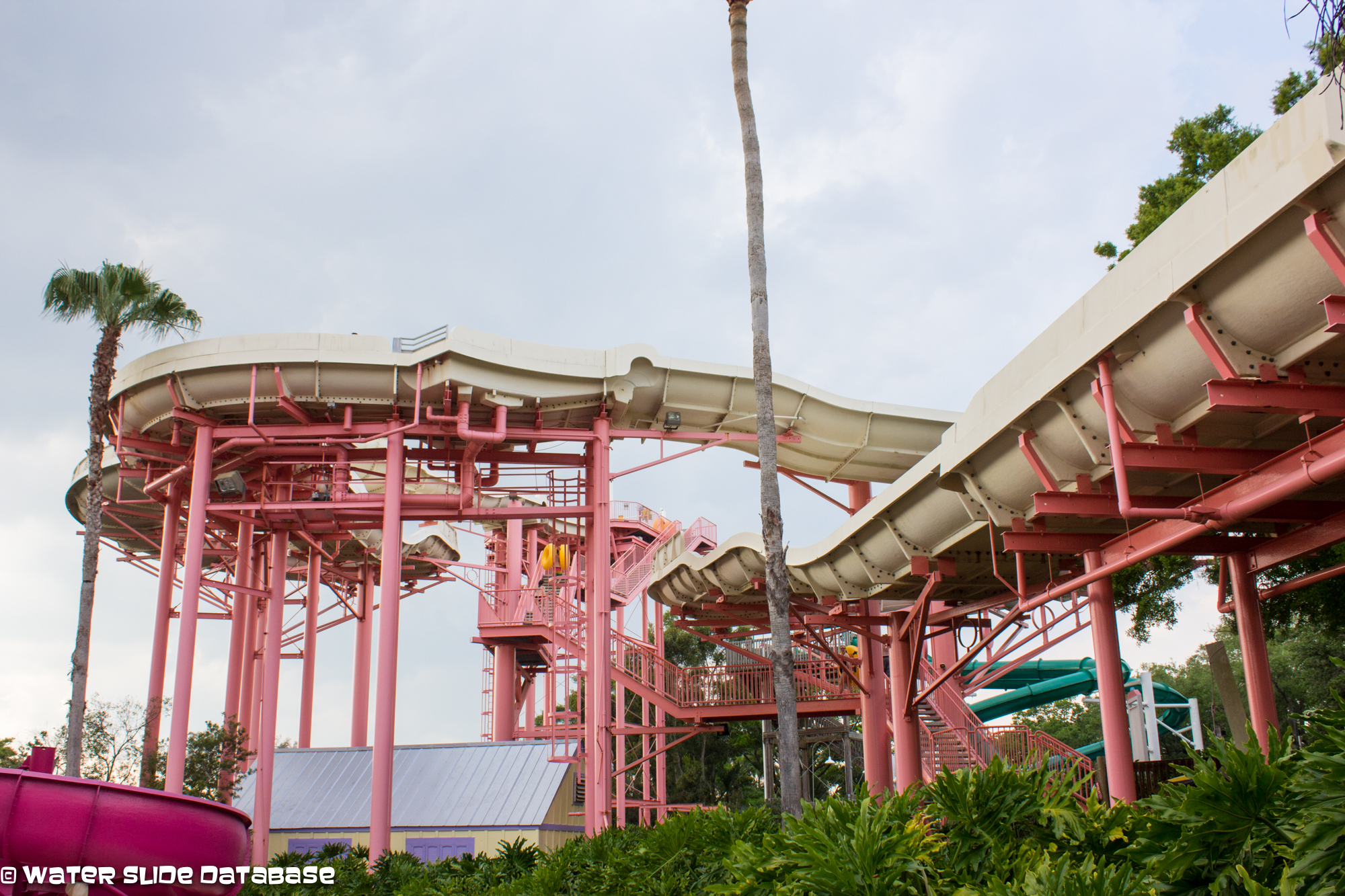 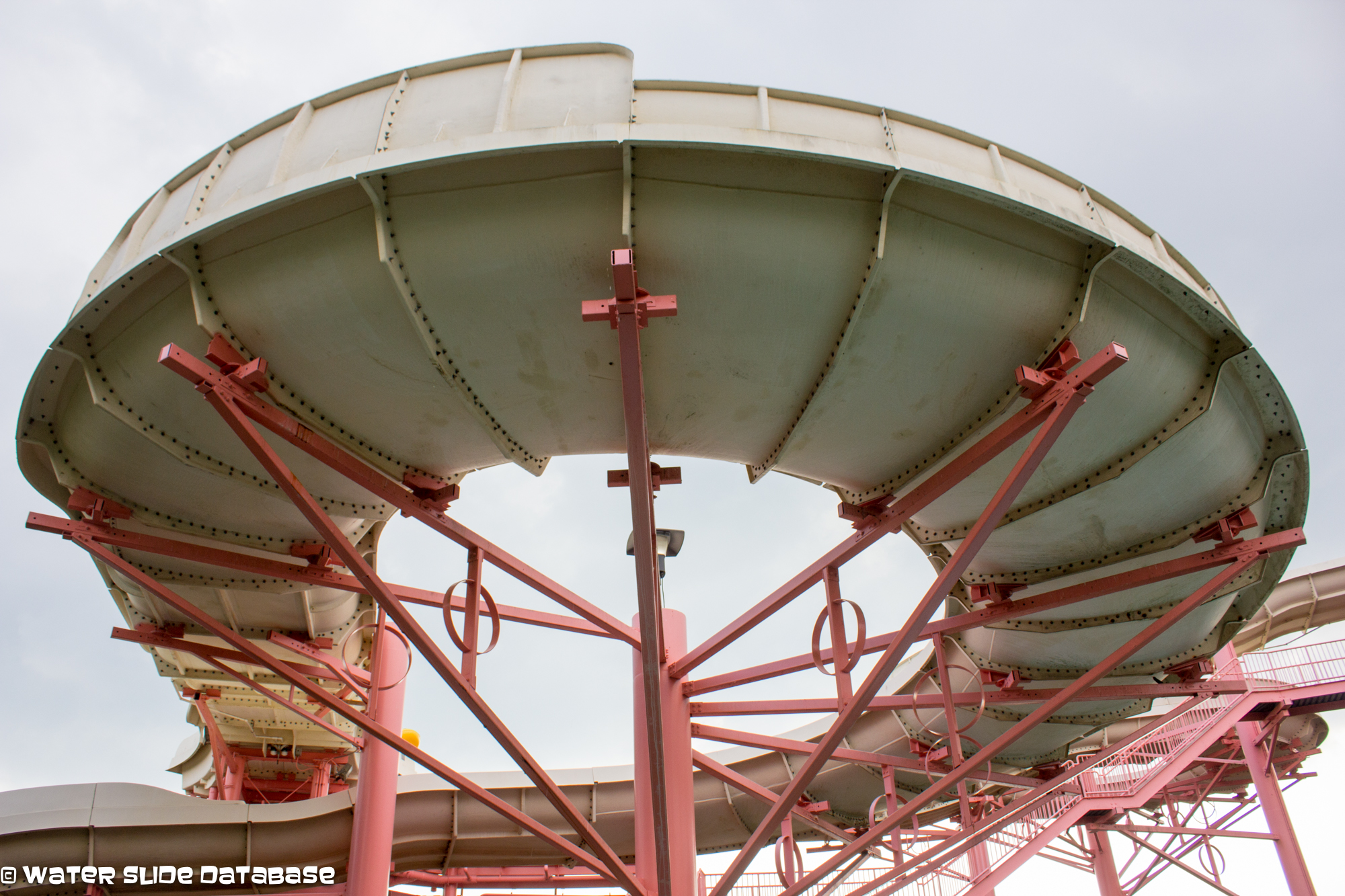 Last, but not least, Key West Rapids is another slide unique to Adventure Island by the fact that it requires riders to ride in single-person inner-tubes down an extremely wide flume big enough to fit a family raft. Along with that, the slide has two splash pools during the course where riders float down a lazy river-like section before a lifeguard advances them onto the next section. 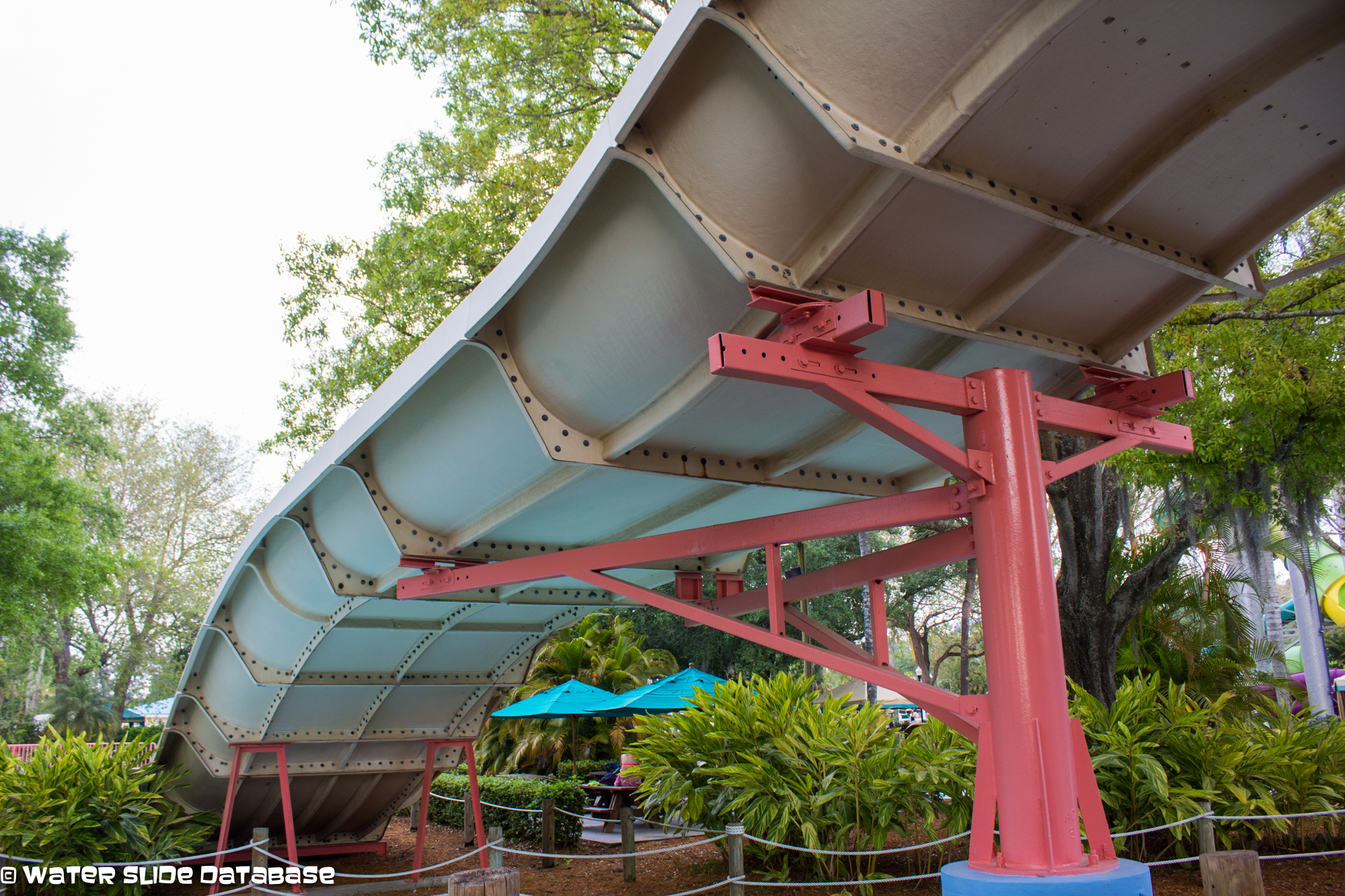 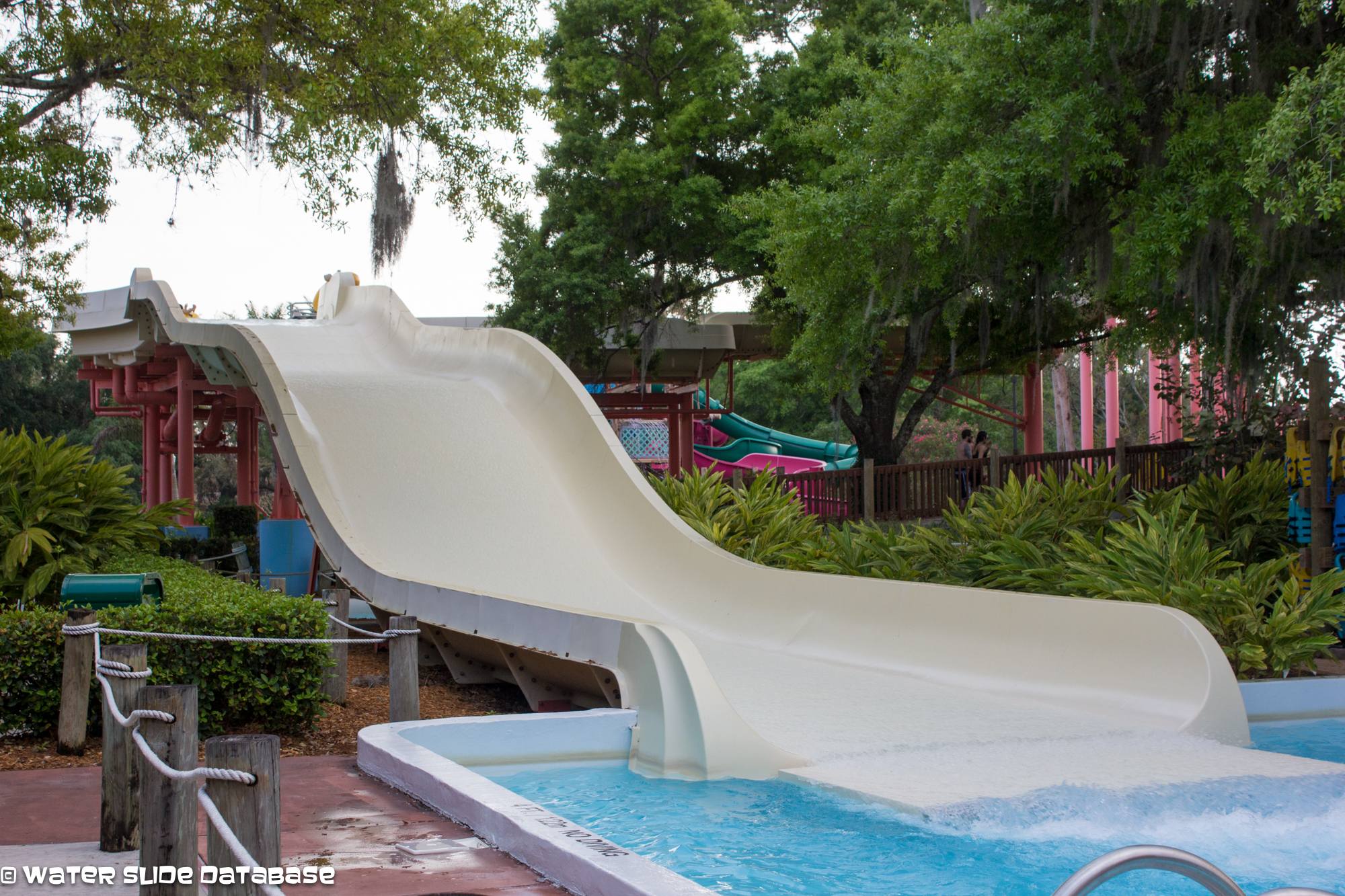 The slide consists of three sections split by the two pools: the initial right helix and single dip, a left helix followed by a double-down, and lastly a much larger double-dip section into the final pool at the end. The slide are easily re-rideable, although the pool sections in between each slide section makes for a sometimes slow and very tame ride. Nothing to wow any park go’ers, but it is something worth trying at least once considering how rare these slides are in the U.S.

The two water slides I were not able to try while at Adventure Island were the two family raft slides, Colossal Curl and Wahoo Run. Wahoo Run is a ProSlide DarkMAMMOTH brand slide which means that the majority of the slide is enclosed and pitch black inside. This ride utilized circular family rafts that can accommodate 2 to 6 people per raft. The slide is situated on top of a hill giving the illusion of it being the tallest water slide in the park when it is not. Wahoo Run was closed during my visit, but it would have still been unlikely for me to ride due to visiting the park solo and the slide not being able to accommodate single riders.

The latter can be applied to the park’s other family raft slide, though, which was operating. 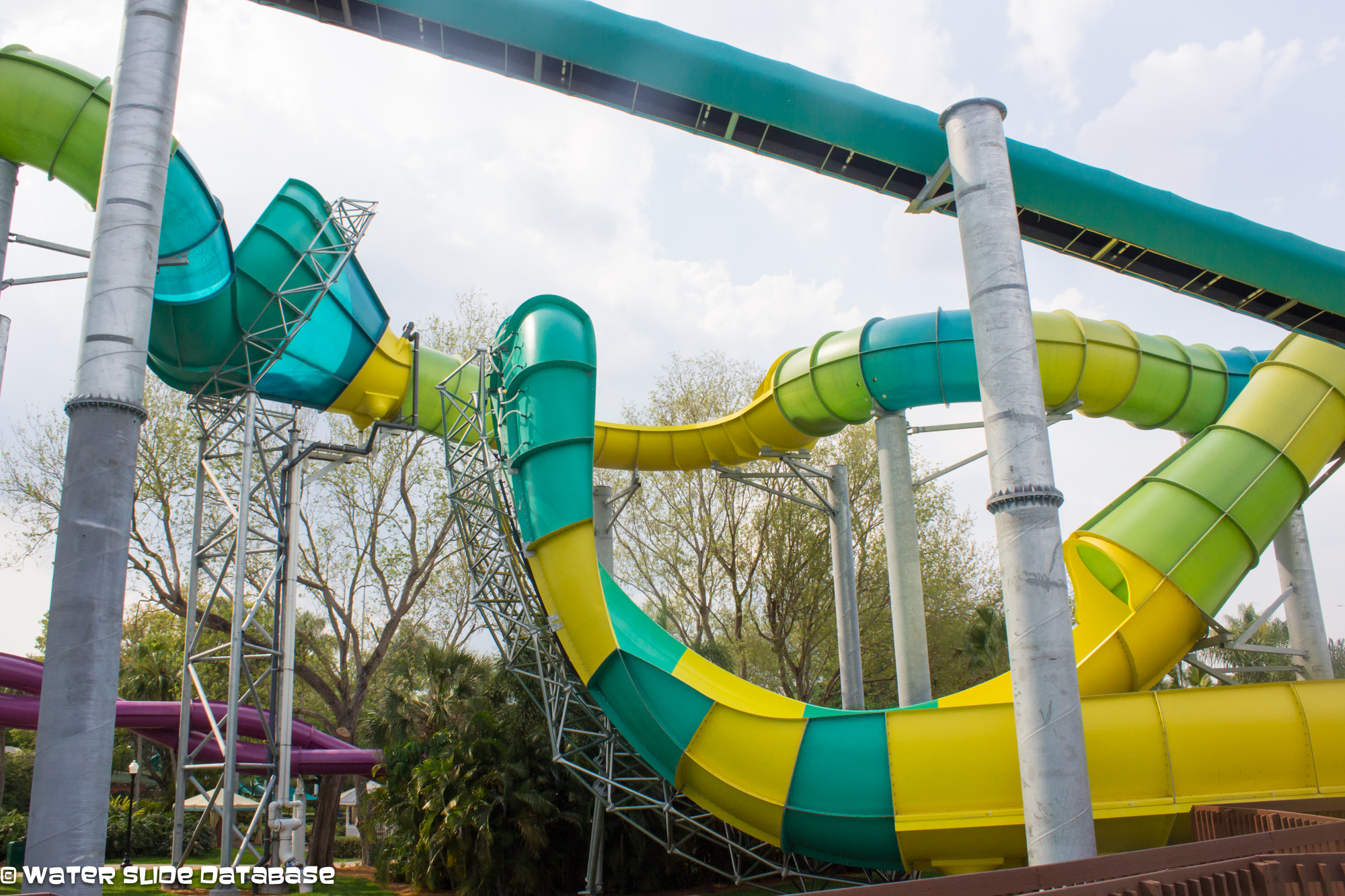 Colossal Curl is a brand new family raft slide that opened earlier this year and has special elements to it to make it more of a thrilling family raft slide. Riders board the four-person cloverleaf raft, then are sent down the flume into a few curves. Riders then enter the first element, a Tantrum (now known as the Tornado 24) section where the raft oscillates back and forth before exiting the small funnel. The raft continues down a few more easy curves before performing a u-turn and dropping down an incline and rocketing up a quarter-pipe wall for a moment of airtime before coming back and exiting out of the element and slowly making its way to the pool at the end. 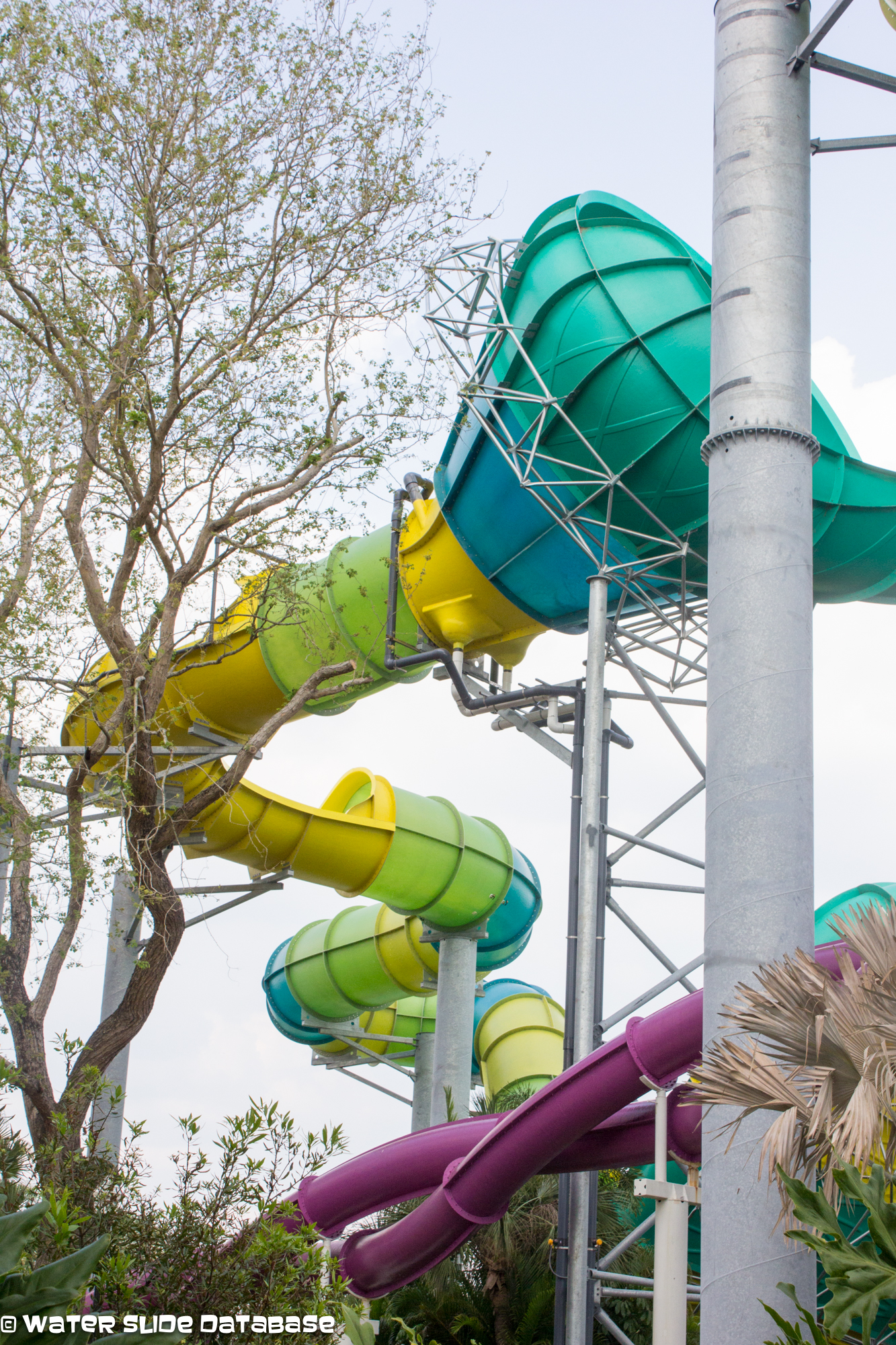 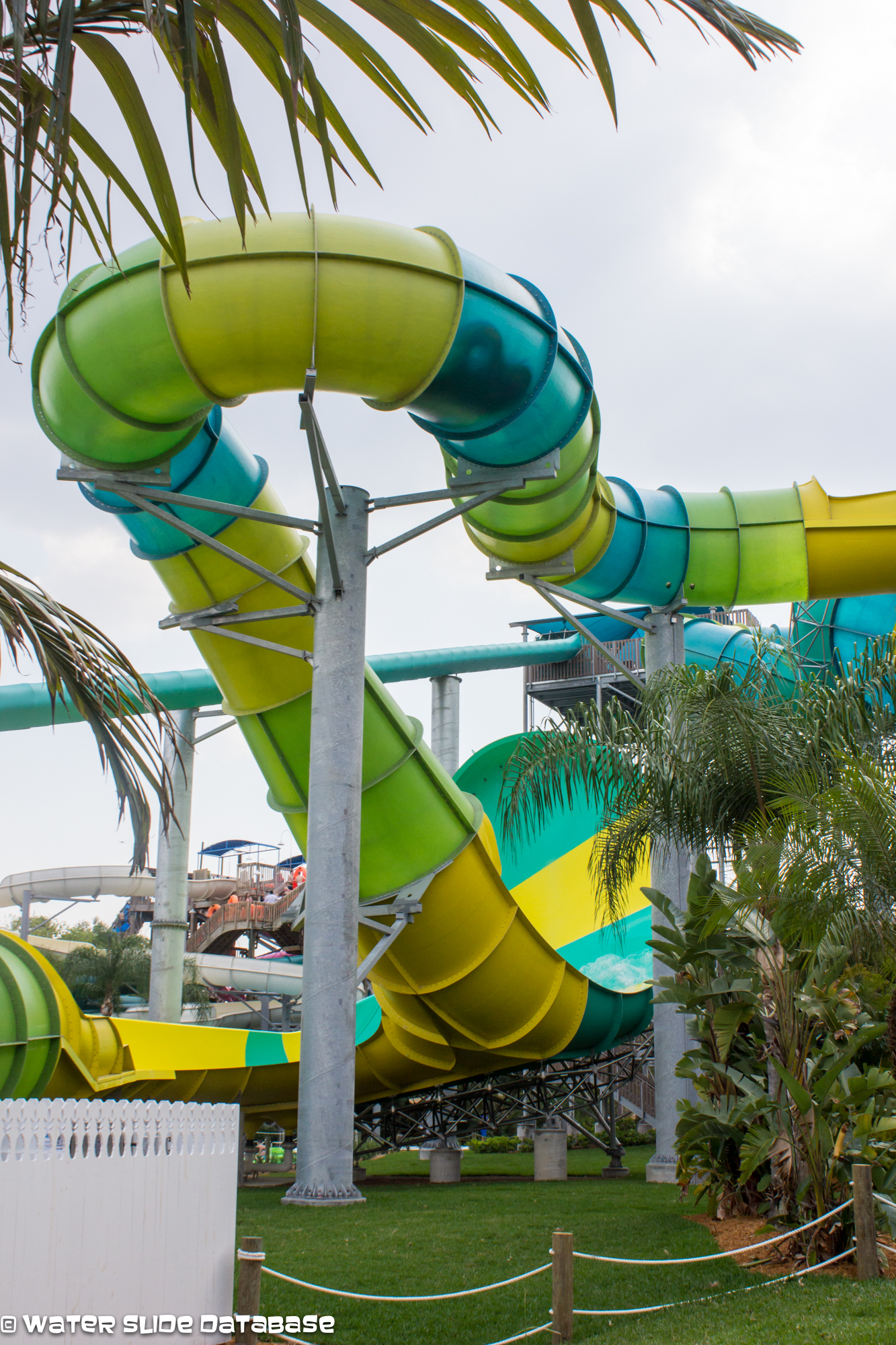 Most riders that disembarked the slide seemed to have bright smiles on their faces, with many mentioning that they were taken by surprise at how thrilling the quarter-pipe element on it was! The slide also had one of the busiest queues in the entire park, with the line having come down as far as the halfway point from the top of the tower.

All-in-all, Adventure Island has a enough of an assortment of water slides to satisfy all levels of thrills, from the thrilling slides to the gentler slides, and many in-between! You can expect to spend at least half the day at the park, though it can easily turn into a full-day if one is a group attempting to tackle as many slides and attractions in the park as they can. While most visitors to the Tampa Bay area may be there for the Busch Gardens theme park next door, I’m certain that if they chose to spend at least half a day at Adventure Island, they will likely not be disappointed. 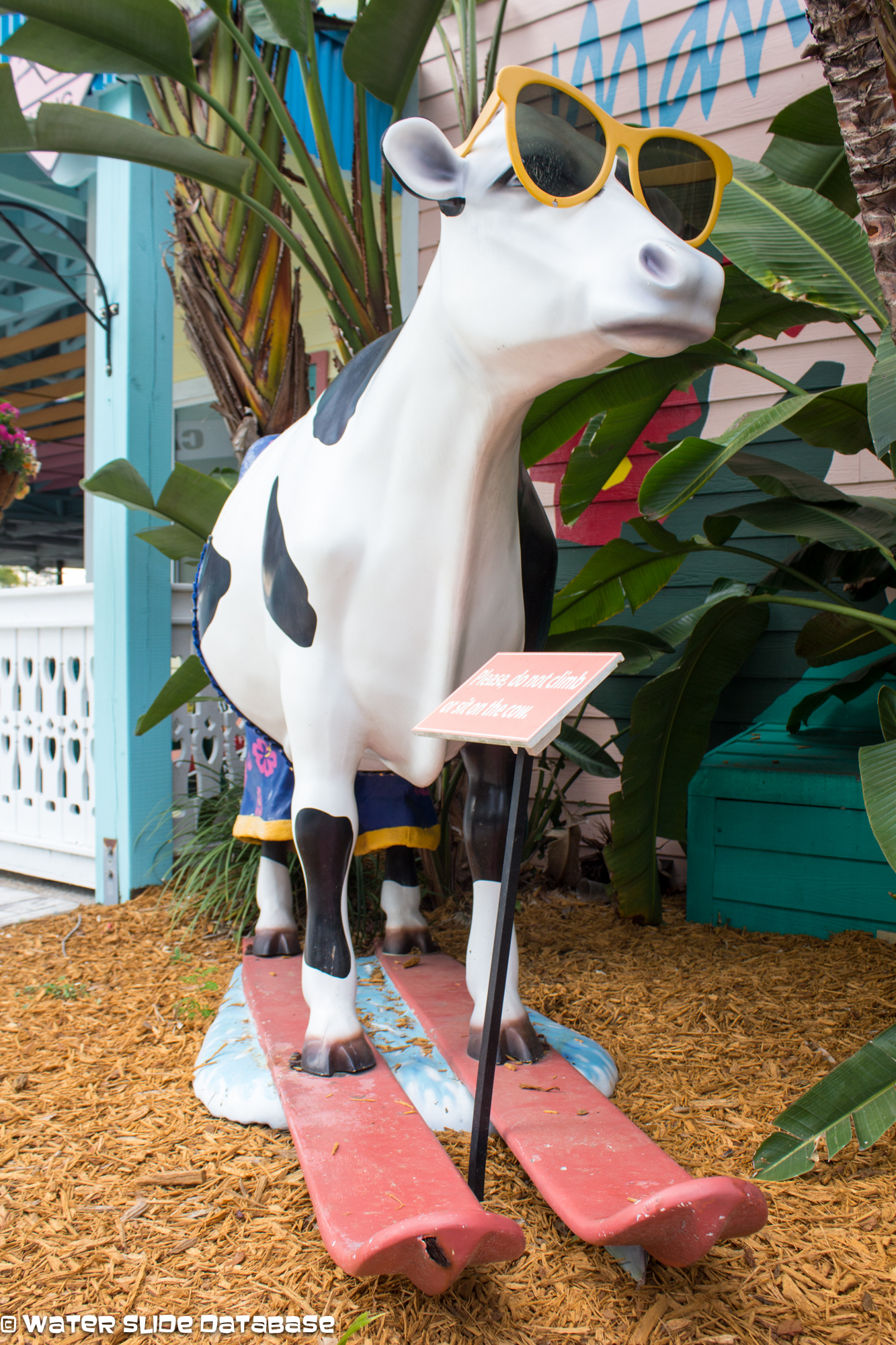 Have you been to the water park before? Do you agree with the scores given? Leave a comment below with your thoughts on the water park!